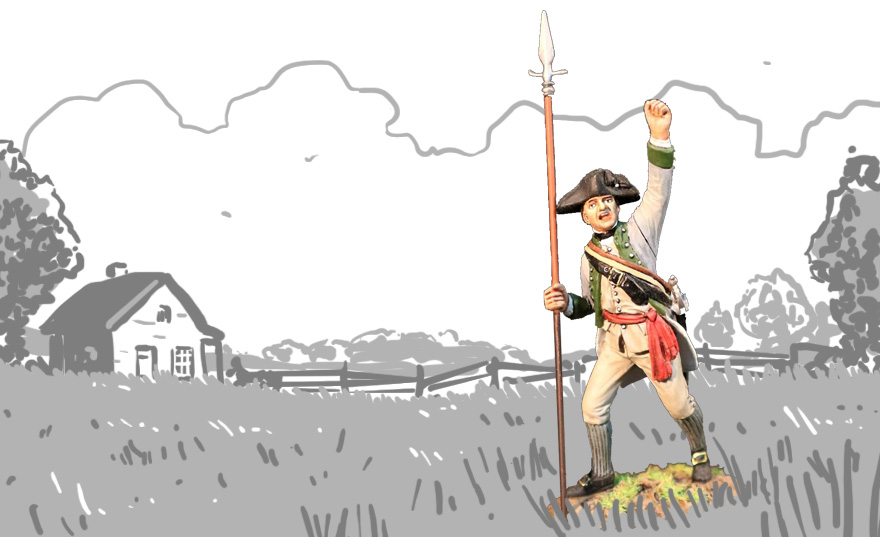 The Continental Army, raised on June 14 1775 for the Revolutionary War, led to the formations of several regiments within the Thirteen Colonies. In most of the cases, those regiments were sharing the same sewing pattern for their uniforms, only changing the colors of the fabrics. In the world of toy soldiers, this means that creating a new regiment is quite easy as the same figure can be painted in many versions. John Jenkins seems to have understood this and keeps covering new regiments by adding new recruits to his Drums Along the Mohawk collection. The latest addition being the JJ-SNY3-01 - 3rd New York Rgt Infantry Officer.

The Drums Along the Mohawk is a big collection with almost 200 figures produced so far. When it began, many of the early pieces were families of armed settlers, suggesting a reference to the 1939 movie “Drums Along the Mohawk” directed by John Ford. This was giving a glimpse of the things to come but, for those who never saw the movie, it was a bit hard to understand where this collection was going. However one thing was clear for everybody; Those figures were good looking and quite useful for many dioramas! Having civilians fighting, including armed women and teens, is hard to find.

Eventually the collection expanded with many regiments from the American Revolution from different factions. Those could be from the Continental Army, the British forces and even from their allies with the Von Specht and Von Rhetz regiments! One of the main criteria for the editorial line quickly became the participation in the Saratoga campaign, but some exceptions were inserted here and there. Figures based on the Last of the Mohicans were even included in this collection, despite the slightly different timeframe and location. So a certain liberty is kept here.

Figures based on The Last of the Mohicans.

To create the various continental regiments, John Jenkins usually reuses the same mold series. The first releases were from the 2nd New York Regiment, the 1st Canadian Regiment and the 2nd Massachusetts Regiment. Those were a huge success and the first batch sold out quickly and new figures had to be produced.

Figures sharing the same mold can be a double-edged sword. This can be disappointing when collectors expect something totally new. But in this case, this is part of the concept and collectors now expect to see more versions of those Continental Regiments. After all, it’s so fun to get access to pieces depicting your local team when collecting!

The 1st Canadian Regiment sold quite well in Canada.

This new JJ-SNY3-01 - 3rd New York Rgt Infantry Officer is simply the lastest officer in this mold-sharing collection. Like his brothers, he is in a walking pose, with an arm in the air and shouting orders. He also carries his spontoon, a sign of his officer rank. 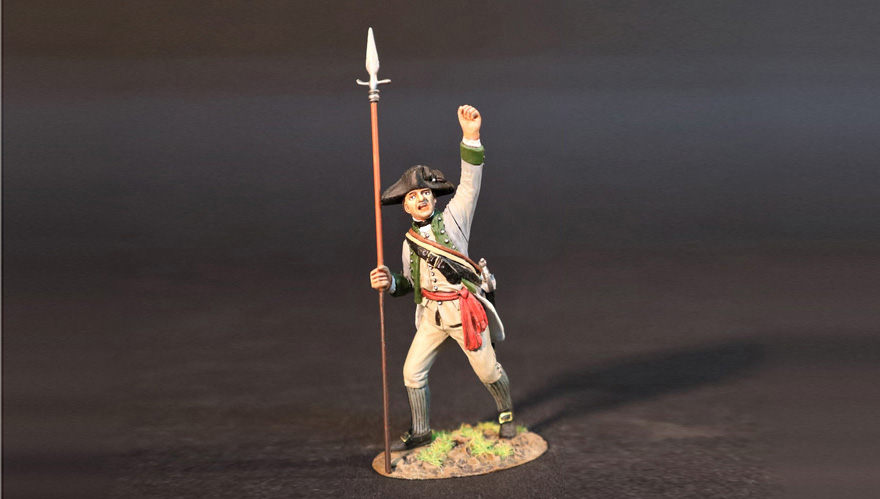 The 3rd New York Rgt, formed in 1775, is mostly known for its participation during the Battle of Oriskany and how the American avoided a trap relying on their uniforms. During the battle, British troops tried to sneak in the American regiments by turning their coats inside out. The inner color of the British coats was a gray close to the outer one from the 3rd New York Rgt and they both had green lining. So, from a certain distance, the British were looking like American reinforcements coming in. The ruse was noticed by Captain Gardenier of Visscher’s Regiment when one of the Americans approached the enemies in disguise to greet them and was quickly captured. The American army promptly retaliated and the British plan failed. In 1780, the regiment merged with the 1st New York Regiment and was eventually disbanded in 1783 at the end of the American Revolution.

To conclude, there is always something tricky in doing a repaint version of a toy soldier. In some cases, this is not working, but in this case, it’s just perfect. Having the chance to get your favorite regiment produced is not often possible in the world of toy soldiers. With this approach from John Jenkins, chances are high that you will get what you want… as long as it was a continental regiment fighting during the Saratoga Campaign!