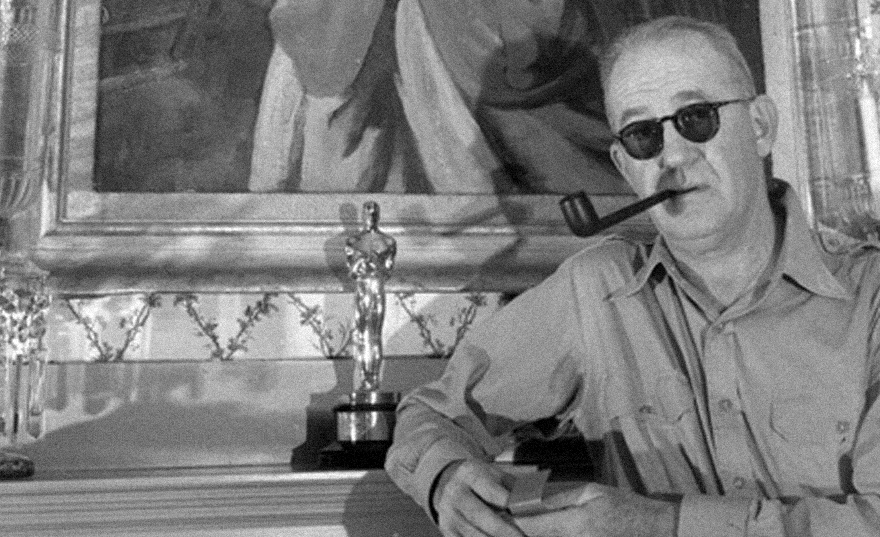 February 1st 1894 saw the birth of a film director who marked the history of the Western movies. His work is responsible for the interest that many collectors have in this genre. His movies even inspired a whole collection by King and Country. In fact, he probably had an impact on many other collections with the numerous war documentaries he produced when working with the Office of Strategic Services. So, to commemorate this important birthday, the monthly blog entry is about John Ford.

John Ford was born in an Irish catholic family from the state of Maine in the USA. His career in cinema started in 1914 when he moved to California to work with his elder brother, a vaudeville actor who switched to movies. There, he worked on random jobs in the film industry. Two years later, John Ford was hired as an assistant director by Universal.

Shortly after, he was promoted as a director for the western stunt movie The Tornado (1917) when the official director did not show up at work. By doing so, he also became the official director for every western produced in this studio; a genre that he will keep coming back to. This is also during those early years that he started surrounding himself with a family of crewmen that will follow him during his whole career.

In 20 years, John Ford proved to be a talented and polyvalent director. He moved from silent movies to talkies and was able to give good results in both studios and outside locations. He was known to respect the deadlines and budget, making him a trusted director for many projects in the studios.

In 1939, John Ford came with Stagecoach, a movie that put back the western movies in the spotlight instead of being considered as B-movie productions. But the westerns were not the only style he was working with. He had a wide array of styles and he even released the excellent drama The Grapes of Wrath in 1940; a movie that is considered today as one of the greatest of all times. 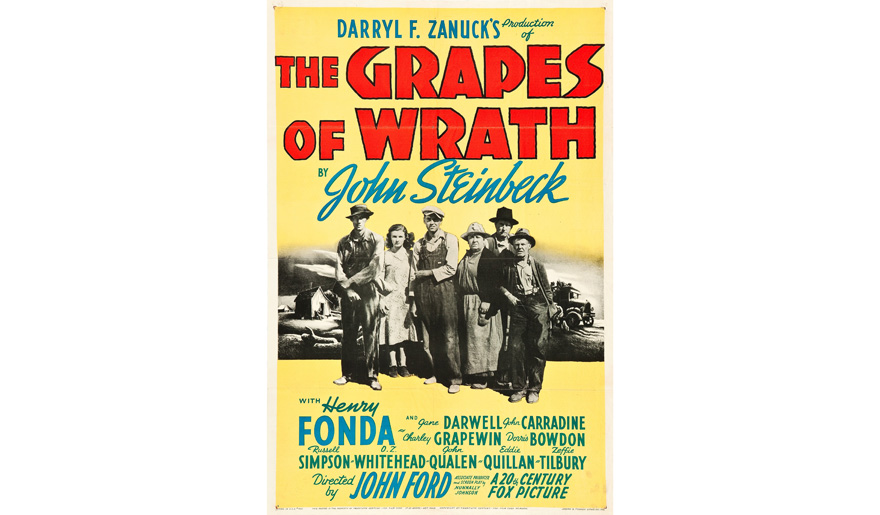 The Grapes of Wrath poster with Henry Fonda, one of the actors that will be later seen in his US Cavalry trilogy.

It’s also during those last pre-war years that John Ford started his second career in the US Navy. Since the beginning of the third Reich, Ford was openly against Hitler’s ideas. He even joined a group of hollywood movie makers who asked Roosevelt to boycott the Nazi Germany. Feeling that the war was inescapable for the USA, he founded the Naval Field Photographic Unit. His organization aimed to get military actions ready to be documented by the qualified workers of Hollywood. So when the hostilities began in 1942, it was his unit that was documenting the war for the US army. Those images were used in collaboration with the Office of Strategic Services to produce documentaries and continue the war effort. While managing his filming units, John Ford also enlisted in the US Navy. He was often on the frontline, directing the documenting of many important operations such as the D-Day landing. It is also Ford who brought the film evidences of the nazi death camp for the Nuremberg trials. Those were filmed during Patton’s entry in Germany. He ended the war with the rank of commander and stayed in the Navy Reserve until 1962 where he retired with the honorific rank of Rear Admiral. His collaboration with the OSS continued for many years, later documenting the Korea and Vietnam wars. 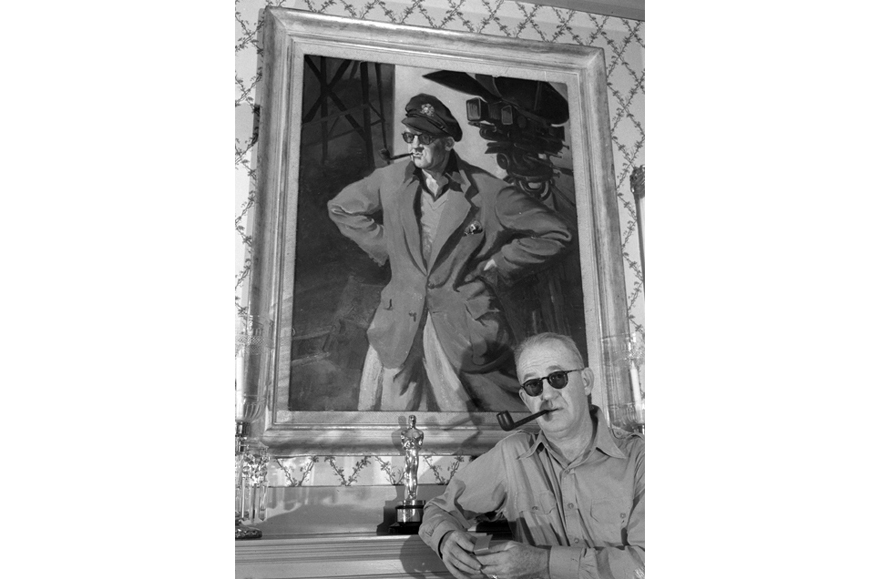 John Ford in 1946 with a portrait of himself while serving during World War Two.

During the post war years, John Ford criticized the way that McCarthy was leading the country and compared it to those used by the Gestapo. Therefore, he found himself tagged as a potential communist and was closely monitored by the FBI. To smoothen things, he subscribed to a film industry right wing group, the Motion Picture Alliance. Nonetheless, he kept documenting conflicts for the OSS during those years and did not change his political views. The documentary “This Is Korea!” he produced presented the conflict as a grim and questionable cause.

It’s also during the postwar years that Ford produced the movies that are of interest today’s blog: Fort Apache (1948), She Wore a Yellow Ribbon (1949) and Rio Grande (1950). They are considered to be a trilogy and do have some continuity through the US Cavalry theme and some characters. However, some actors are coming back in each movie while playing a totally different role. Such is the case for John Wayne and Victor McLaglen. This makes the continuity a bit weird, but it somehow works! 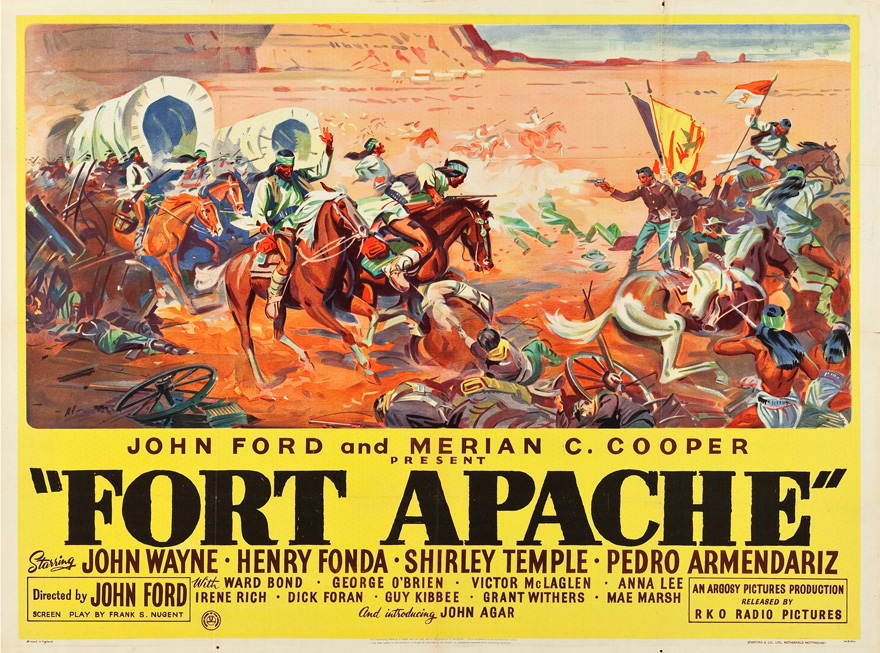 Fort Apache poster, my personal favorite in this trilogy.

The most marking of those three movies is probably Fort Apache as it gives the tone of this series about the US cavalry. It manages to explain how the esprit de corps manges to exist, how it can stay proud and survive despite the loss of companions and the occasional poor leadership. It was the first movie to denounce how the Native Americans were badly treated by the US government in the past. Prior to this movie, Native Americans in westerns were often limited to being bad guys and killing them without questioning was ok. In Fort Apache, they are presented as proud and intelligent people with no other choice but to rebel.

But what is really making those movies marking is the look of the US Cavalry. Those are more US Cavalry than the real US cavalry itself! The uniforms that were used for those movies are pure creations designed to look good with their white hats and striking yellow neckerchiefs. They were inspired by the real uniforms, but they are not accurate at all. Still, they have influenced the collective idea of what US cavalry looks like world wide. Therefore, they were worthy of having their own series of figures for collectors.

John Wayne and Maureen O’Hara in Rio Grande and their toy soldier version.

The John Ford’s US Cavalry collection that King and Country came with started as an exclusive product, thus the KX code of those items. But they quickly got added to the products accessible via the dealers. They are, if you ignore the creative uniforms, compatible with the most recent pieces from The Real West collection. The first pieces from the TRW collection were based on the conflicts prior to the American Civil War. Sales from this collection were OK, but it’s really when post American Civil War pieces were added that it really exploded. One of the reasons being the legacy of John Ford’s film and how they marked the collectors. 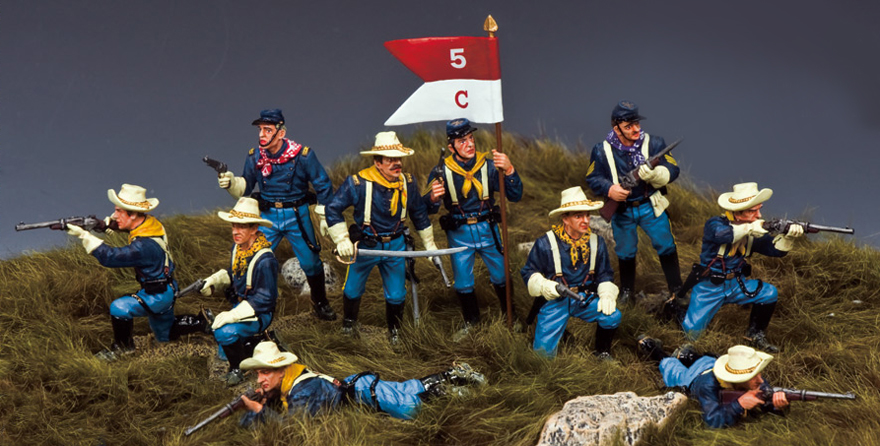 Some of the pieces inspired by John Ford and made by King and Country.

John Ford died of cancer on August 31st 1973. During his lifetime, he managed to become one of the most famous and prolific movie directors of Hollywood. Sadly, about one third of his work was lost. But, amongst what is still available, many masterpieces can be found, including the US Cavalry trilogy. Those movies not only reshaped the collective image we have of the post American Civil War cavalry, but they gave birth to one of the best series of figures based on a movie.