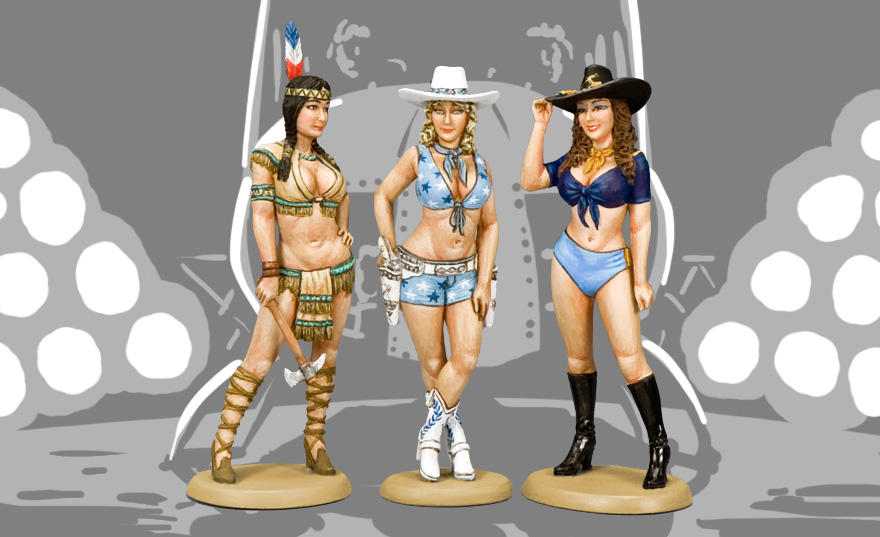 We recently talked of the USO show from the movie Apocalypse Now in a previous blog entry about Suzy-Q. But it’s already time to talk again of that scene as King and Country just released a set inspired by the three playmates from that scene! Behold the VN147 - The Apocalypse Playmates Set.

The 1979 movie Apocalypse Now, by Francis Ford Coppola and nominated for 8 Oscars, brings us in the middle of the Vietnam War, in what is a long journey towards a more and more outlandish and mad world. One of the last contact points with the American civilization in the movie is the USO show in the middle of the jungle. There, on a tropical river bank, a recreational show was organized to give a feeling of being home to the GIs fighting at the other end of the world. In this scene, three playmates are delivered by helicopter and a crowd of uncontrolled soldiers while Suzy-Q by CCR is playing. Francis Coppola, in one interview with Playboy magazine, explained that this scene was put there as a symbol of abuse. The message was that sending a 17-year-old boy to Vietnam was as immoral as serving those three girls to this mad crowd. The scene ends in total chaos, with a swarm of young soldiers escalating the stage and forcing the girls to retreat in their helicopter.

Interestingly enough, the filming of that scene became seriously threatened at some point. When hitting the Philippines in May 1976, the typhoon Olga totally destroyed many of the sets constructed for the movie, including the one that was meant to serve in the USO show scene. The whole thing had to be rebuilt and became the iconic stage with giant phallic munitions surrounding the place.

One of the main reasons for the success of this scene is the work of Dean Tavoularis, production designer working on Apocalypse Now. He is also known for the look of The Godfather and Bonnie and Clyde. Tavoularis is the one who designed the look of that scene, including the costumes seen on the playmates. Beautiful production sketches survived to this day. 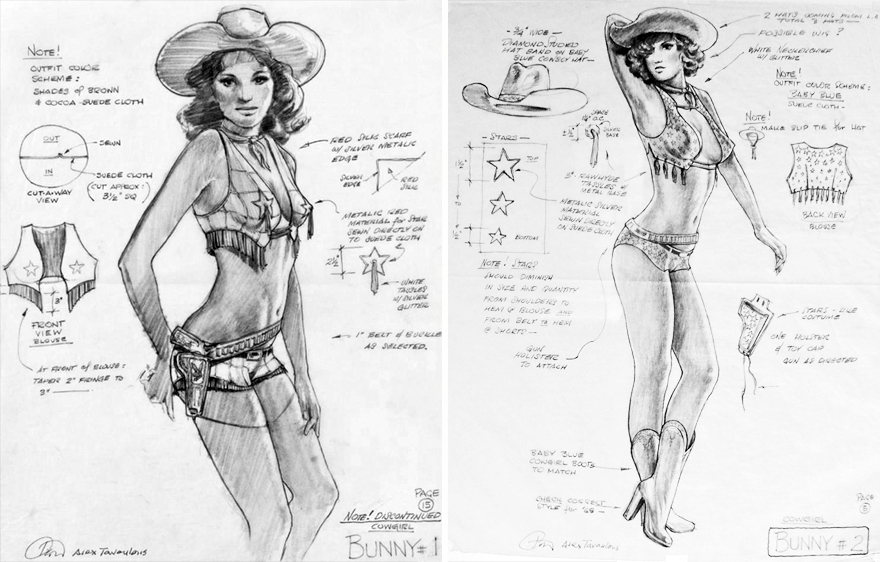 Research sketches for the bunnies by Dean Tavoularis. The design on the right can be seen in the movie.

Of course, those playmate characters needed actresses to bring them to life. Those were Cynthia Wood (the Cowgirl), Colleen Camp (the Indian) and Linda Carpenter (the US Cavalry Girl). Wood and Carpenter were both actual playmates and posed for Playboy prior to the movie release. During those years, the usual procedure for filming with official playmates was to get a visit from a Playboy agent. The magazine wanted to ensure that any productions involving their playmates were not cheap in view to preserve a certain “quality” to the girls seen in their magazines. But this step was skipped for Apocalypse Now, most likely because Coppola’s reputation was already well established. As for Colleen Camp, who started her acting career at the age of 3, she was not so sure about the nudity required for this role and almost refused the job. However, her friend Cynthia Wood (the Cowgirl) convinced her otherwise. The questioning about nudity refers to scenes that were shot, but eventually cut from the original version of the movie. Those can be seen in the Apocalypse Now Redux extended version released in 2001. Eventually, Colleen Camp ended up playing in more than 100 productions including known titles such as Wayne’s World, Police Academy and Die Hard with a Vengeance. 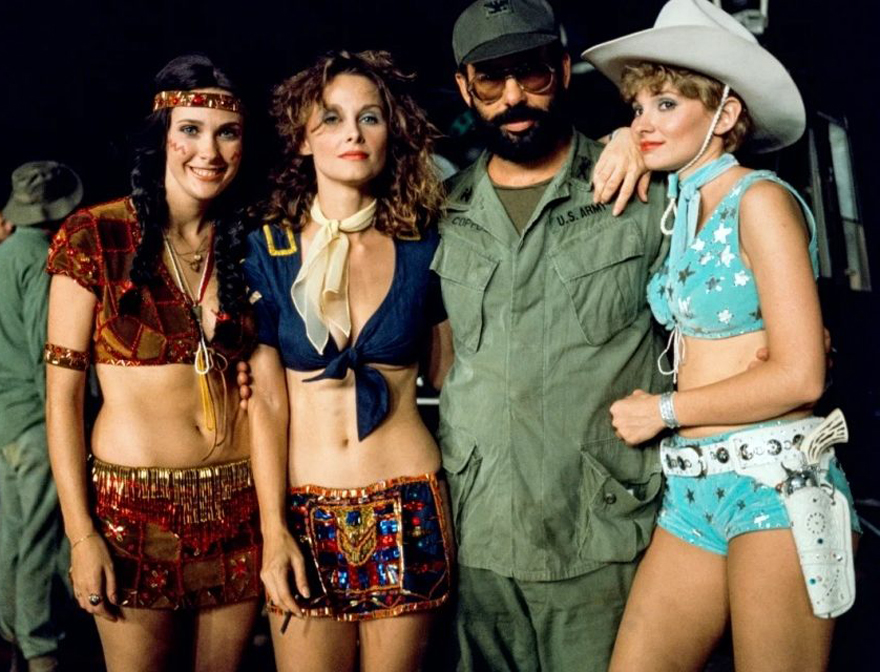 It is interesting to know that, despite Apocalypse Now being a fiction story, real playmates actually went to Vietnam. However, it never was in the form of a show like the one seen in the movie. One of the most interesting stories is the one of Jo Collins. During the 60’s, the deal was that a lifetime Playboy subscription was deliverable by a Playmate. So a bunch of soldiers from the 73rd Airborne Brigade joined their forces and purchased a lifetime subscription to a soldier named Jack Price. So Jo Collins went there to deliver the goods to the hospital where Jack Price was. She accepted the mission without knowing the destination. Collins was sure she was going on some trip in Europe but ended up in a warzone. She later reported that her visit was both scary and exciting as bombs were exploding nearby. However, she also mentioned that her clothes were not as attractive as those seen in the movie and mostly functional. During her “business trip” to Vietnam, she visited as many medical fields and bases as possible. You can read more about her expedition here. 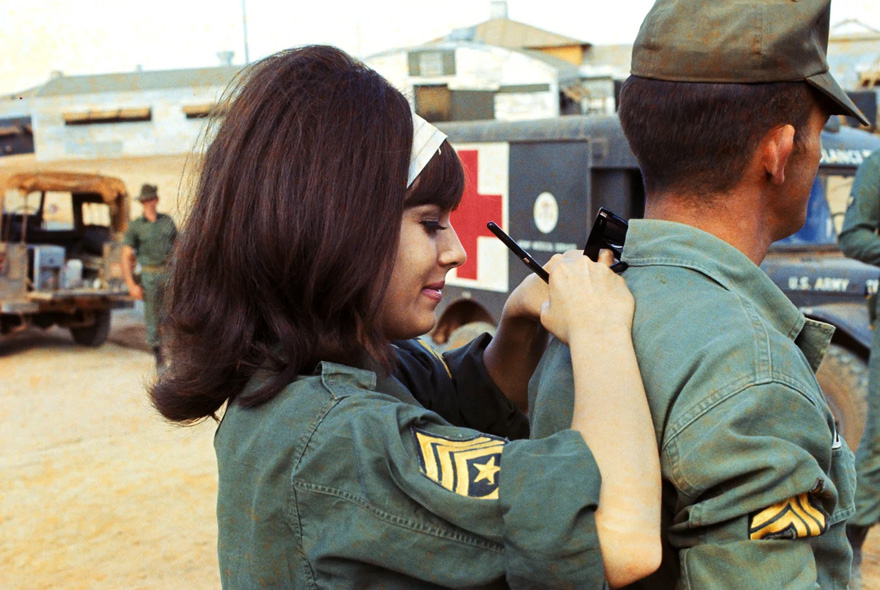 As for the figures produced by King and Country, those are not exact copies from the movie, but greatly influenced pieces. Those three miniatur playmates manage to keep the same essence as the one in Apocalypse Now, but with different details. In some cases, this was simply impossible to do otherwise. The iridescent paillettes patterns from the US Cavalry and Indian costume are just too complex to be reproduced at small scale. So the skirt of the US Cavalry playmate was replaced by a pair of pale blue shorts while the Indian costume underwent a complete transformation. However, the Cowgirl is surprisingly accurate. Only the haircut is noticeably different compared to the character played by Cynthia Wood. So, overall, it’s a pretty neat adaptation job!

To conclude, it’s good to see that Apocalypse Now still inspires creation after all those years. The figures King and Country came with might not be exact replicas of the playmates seen in the movie, but they managed to keep the same essence. Plus, as every piece related to a movie, they come with an interesting story!