A Beothuk as the First Skræling!

A Beothuk as the First Skræling! 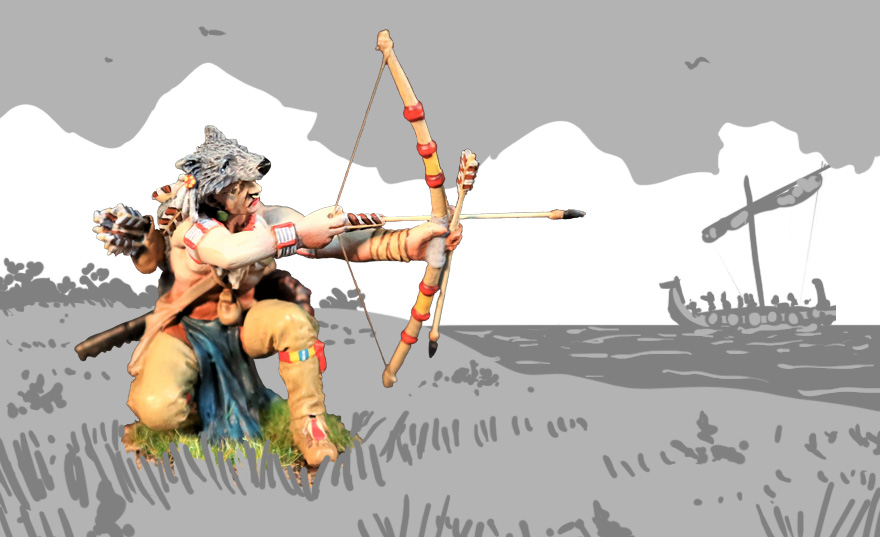 Five hundred years prior to the Spanish conquest of America, Vikings were already exploring the New World. Viking Sagas mention encounters with local peoples called the Skrælings. Those enigmatic folks are now appearing in the Conquest of America collection by John Jenkins. With the release of the JJ-SK-01 - Beothuk Warrior and beginning of a new sub-collection, it might be nice to look at who those mysterious Skrælings were.

Skrælings is a Norse word that refers to any indigenous people encountered in America. The origin of the word is subject to debates and speculations. It could mean either “weakling”, “ugly peoples” or “dried skin” in reference to the animal pelts used for clothing. Archeological studies and accounts from the Viking Sagas suggest that Skrælings might be referring to four main ethnic groups: the Thule people, the Dorset people, the Miꞌkmaq and the Beothuk.

The new sub-collection produced by John Jenkins belongs to the Beothuk, meaning “good people”. Those were hunter-gatherers located on the island of Newfoundland and were probably a very small population. It was estimated the Beothuk population was about 2000 in the early 15th century and might have peaked at 10000 prior to that. The forthcoming figures are covered with animal pelts, making them supporting the “dried skin” theory for the word “Skræling”. The pre-columbian look of the Beothuk people is a bit of a mystery, but links established with cousin groups such as the Algonquins can help to make guesses. At the time of their encounter with the Vikings, the Beothuks were still using stone age technologies. This is why every weapon they have in this collection is archaic. The Beothuks wanted the strong iron swords and axes of the Vikings and were looking to trade with them. Unfortunately, they had nothing of interest for the Norse settlers who were looking at the Skrælings as primitives. Every attempt to seize this new technology by force ended in the killing of many Beothuk. 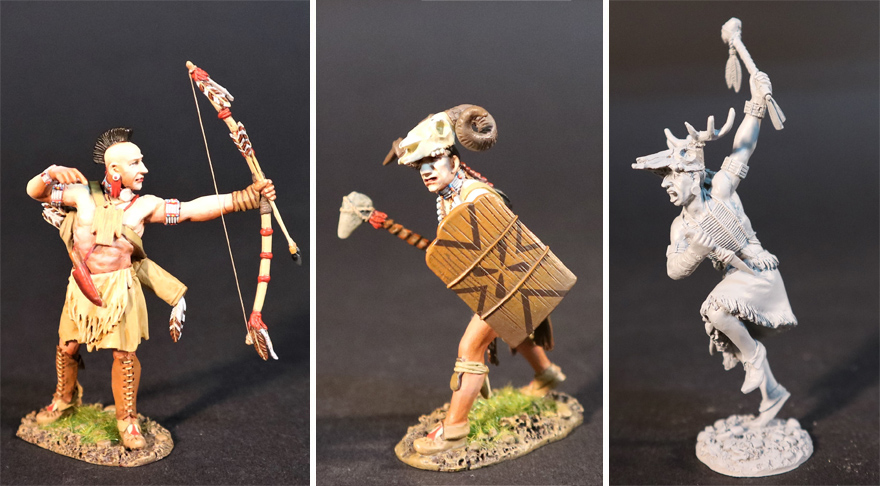 Various pieces to come in this collection. Animal hides and stone weapons will be the thing for 2022!

The new figurine produced by John Jenkins shows a plausible proposal of the Native American look at the origin of later look found in other collections inserted later on the timeline. The leather leggings and decorations on the bow are almost the same as those seen in the Raid on the St.Francis collection. However, the bow is coming with stone arrows, making it outdated compared to the iron swords of the Viking settlers. The animal headdress and the beast head sculpted on the war club also show a connection with a more animism culture compared to the later new animism way of life developed with the post-Columbian world. A beautiful detail is the two extra arrows held in the hand for a quick second shot. The way the bow is handled also respects in detail what we know of archery technique within the First Nations, with the index securing the arrow on the left side of the bow instead of the thumb on the right side as done by the Mamluks.

To conclude, this new Beothuk warrior seems to be the first step in a very promising sub-collection. A great attention to details was taken to recreate a look that is different from the indians in the other collections by John Jenkins while showing a certain continuity. It’s also interesting to see a visual from a timeframe and space that is not often covered in the world of toy soldiers. I wish toy soldier makers would explore those territories at the edge of history more often as where there is speculation, there is creation.