Now this is a Sejanus!

Now this is a Sejanus!

Since I watched the TV show “I Claudius” when I was a kid, I was quite intrigued (and scared) by Sejanus. Sir Patrick Stewart was bringing this historical character to life in a brilliant way, showing a manipulative, intelligent, deadly and charismatic chief of the Praetorian Guard. So when I saw that King and Country produced a Sejanus, I was very excited! My first reaction to the images was an instant like. So let’s take a moment to appreciate the ROM054 - Chief of the Praetorian Guard by King and Country.

The first striking feature here is the massive use of the purple color. Purple in that time was a luxury pigment obtained by the laborious harvest and processing of murex mucus. (This sounds nasty, heh?) This dye was expensive and to see it used on such a large scale is only fitting as it shows Sejanus’ status. It also matches what some historians suppose could have been the color of the Praetorian Guard during that time period. As it was an elite troop, luxury uniforms might have been issued.

The decorations on the horse are also striking. The crest on the horse’s head is very impressive and the long gold and purple caparison is a good choice for the mount of an important character. This however gives a surprising optical illusion; the horse can look skinny because of the size of the decorations. But after verification, this is truly a normal horse underneath. 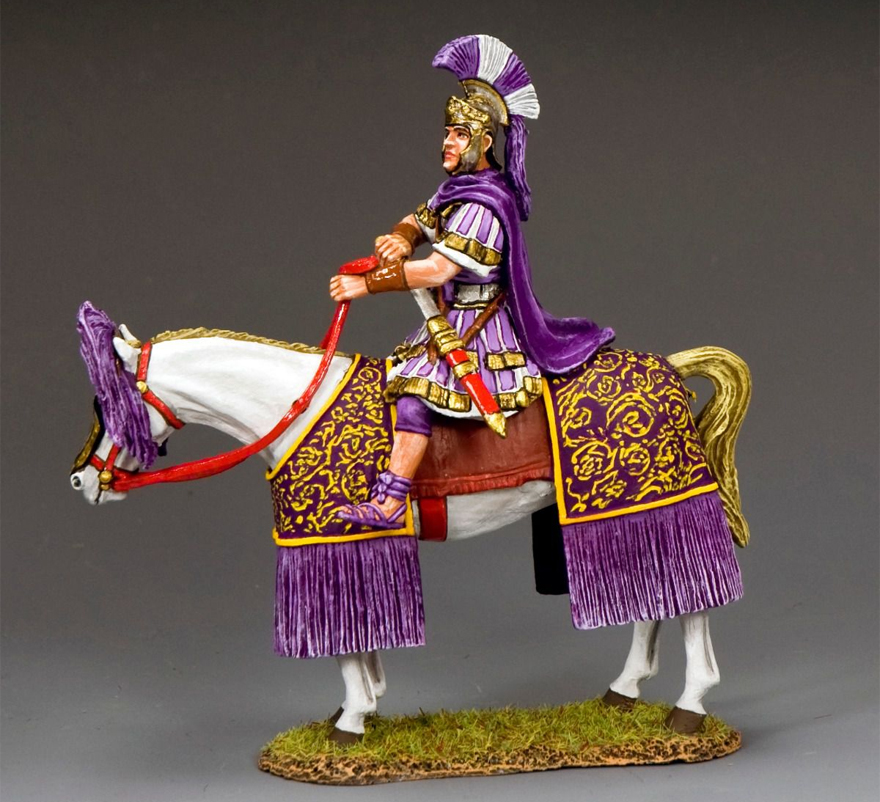 The way Sejanus is depicted taking out his sword is also a very good idea. This matches his aggressive and combative personality. His armor is well crafted, with plenty of gold and some fine details such as ribbons on his ankles. Those artistic choices make this figure as useful in parade scenes as it is in combat.

The golden embroidering on the horse’s caparison is also very interesting in terms of figure production. The pattern is pretty sketchy and it’s hard to make any sense of it. However it works! It somehow gives the feeling of rich embroidering in its overall appearance without having to spend hours on it. This economy on the details is an efficient trade off that helps to keep the price of the figure reasonable.

Pretty colors, spectacular mount, useful pose etn clever production; this toy soldier is a good version of Sejanus.Now, for those who have never seen the TV show I Claudius, I leave you the trailer here. And yes, Patrick Stewart had curly hair in that show...