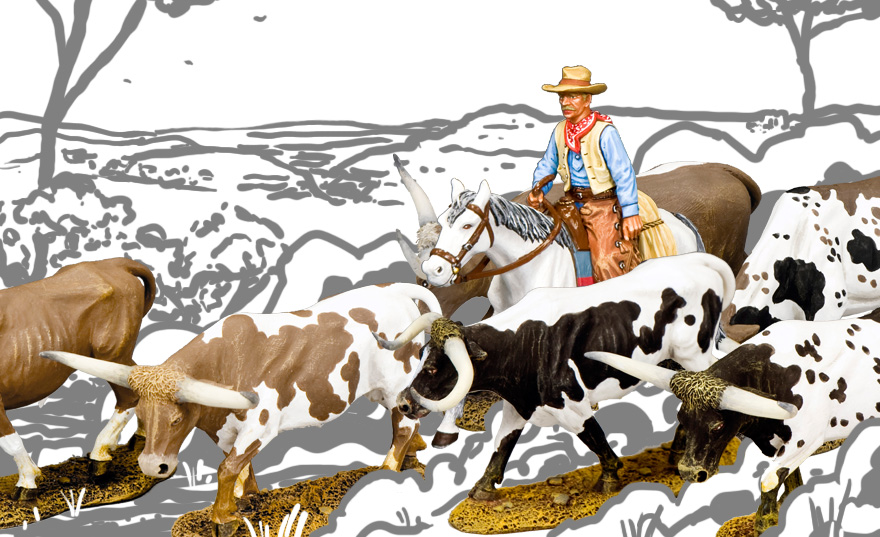 What a lucky month we have! King and Country launched a new collection! So this time we won’t be looking only at one piece but at a whole new collection. Behold the Cattle Drive, a theme that is taking us back to the USA shortly after the American Civil War.

The first thing noticeable with the Cattle Drive is the amount of cattle. Six out of nine new releases are indeed Texas longhorns. These figures are made of different combinations of colors to create a massive herd effect to start up the collection. This is a mandatory thing to have many of them as the main theme here is, of course, cattle driving!

The six sets of Texas Longhorns. As you will notice, it's all about changing the colors.
There are only four different molds of cattle, but it works!

The Texas longhorn’s origin dates back to the first European colonists. Portugese cattles were brought to America by conquistadors. Those cattle breeds were well adapted for the warm climate of the Spanish territories in North America. When northern mexican territories were annexed to the USA, the Portugese cattles began to interbreed with the various British cattles used by the Americans. This eventually gave birth to the Texas Longhorns; a breed characterised by its tolerance to heat and diseases but giving very little milk. Shortly after the American Civil War, Texas longhorns were quite a common sight in the USA. Despite its success, this breed almost went extinct during the 1920’s when british breeds became more popular on the farms and ranches. But in the case of the place and time period covered by the Cattle Drive collection, it’s impossible to find a better breed of cattle to go with this new theme! 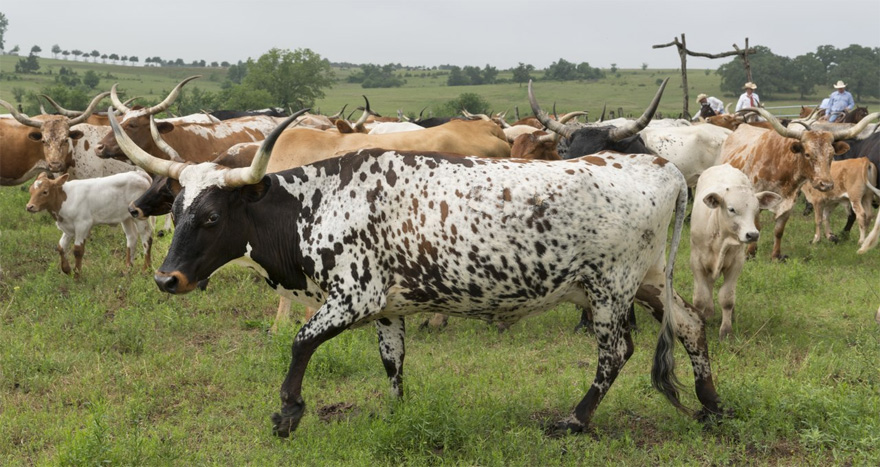 Those are real Texas Longhorns.

With such an accurate historical background, this breed of cattle seems a bit exclusive and hardly compatible with other collections, but this is not the case. For the average collector who is not an expert in various bovinae, this is close enough to other cattle breeds and therefore can find its place in other collections. The Peninsular War collection could be a nice place to use them as they have origins in this place of the world. They are also quite close looking to the South African Nguni breed and could be seen with Zulu pieces. Overall, this new selection of farm animals will be more than useful in many other collections!

According to wikipedia, those are Ngunis.
They are pretty close looking for the common of mortal.

The other new releases from Cattle Drive are three magnificent cowboys (not seven) on their horses. Each one of them does have a very unique look with a colorful shirt and neckerchief. Those are dressed in a post American Civil war fashion. The description for the CD001 - The Trail Boss even suggests a background in the confederate army as a former officer, helping us to really feel the time frame. But despite that, those could probably be used to serve as civilians looking at a marching confederate or union army. However, one very intriguing detail is that they are all equipped with revolvers. Many cowboys were equipped with guns, but not all of them. Is this suggesting a potential for some action in this new series of pieces? Maybe some bandits will be trying to steal the cattle during the next months?

So, Cattle Drive is already showing interesting pieces with plenty of potential not only within this collection, but in other collections too. It’s now time to dream and take guesses about what will be released next. For myself, I predict a black cowboy. In the years following the American Civil War, 25% of the cattle herders were former slaves. It would make only sense to see one in this collection! What piece do you think will be next?