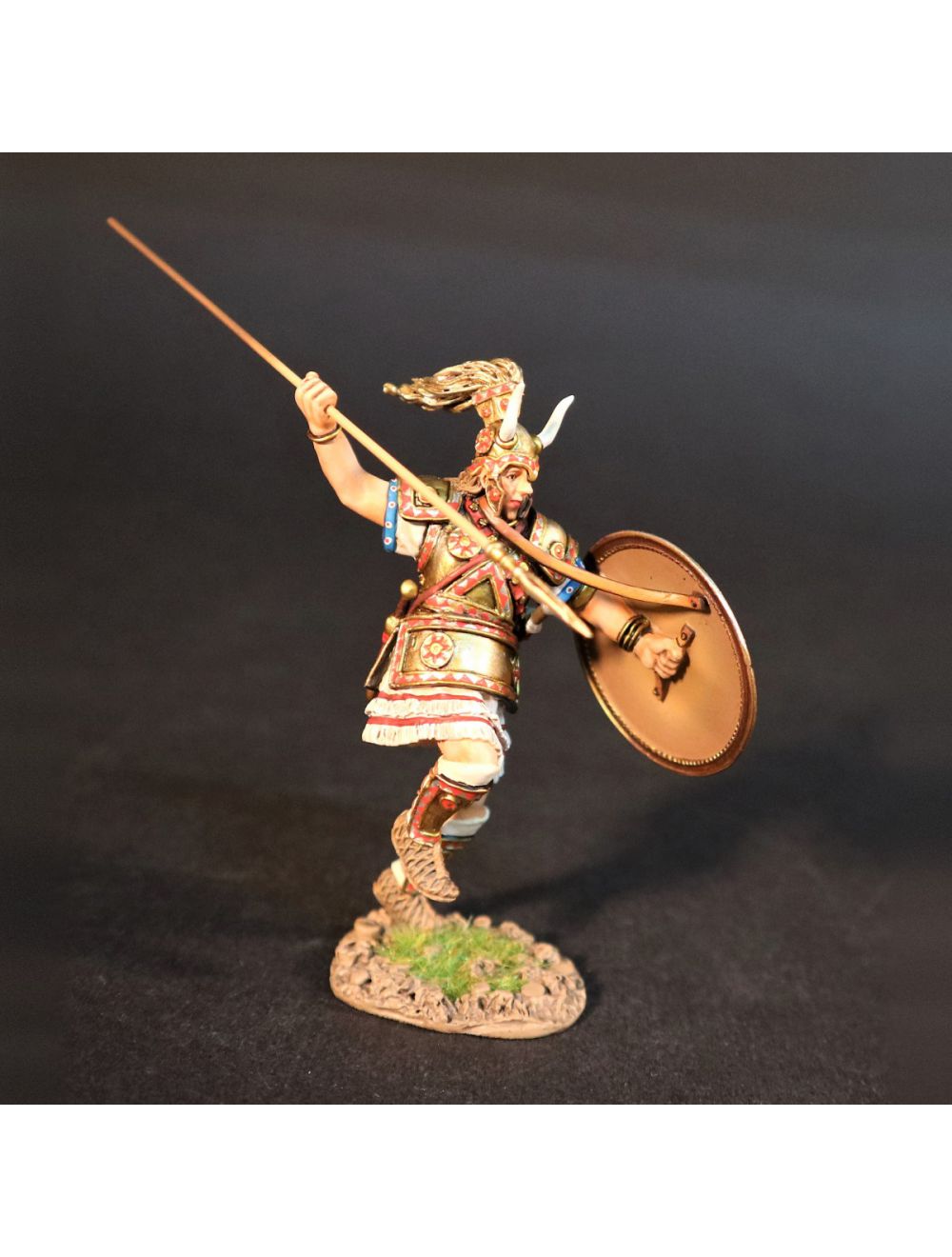 In Greek mythology, Achilles was a hero of the Trojan War, the greatest of all the Greek warriors, and is the central character of Homer’s Illiad. He was the son of the Nereid Thetis and Peleus, king of Phthia.

Traditionally, the Trojan War arose from a sequence of events beginning with a quarrel between the goddesses Hera, Athena and Aphrodite. Eris the goddess of discord, was not invited to the wedding of Peleus and Thetis, and so arrived bearing a gift. A golden apple, inscribed “for the fairest”.

Each of the goddesses claimed to be the “fairest”, and the rightful owner of the apple. They submitted the judgement to a shepherd they encountered tending his flock. Each of the goddesses promised the young man a boon in return for his favour. Power, wisdom, or love. The youth, in fact Paris, a Trojan prince who had been raised in the countryside, chose love, and awarded the apple to Aphrodite.

As his reward, Aphrodite caused Helen, the Queen of Sparta, and the most beautiful of all women, to fall in love with Paris.
The judgement of Paris earned him the ire of both Hera and Athena, and when Helen left her husband, Menelaus, the Spartan king, for Paris of Troy, Menelaus called upon all the kings and princes of Greece to wage war upon Troy.

Menelaus’ brother Agamemnon King of Mycenae, led an expedition of Achaean troops to Troy and besieged the city for ten years because of Paris’ insult. After the death of many heroes, including the Achaeans, Achilles, Ajax and the Trojans Hector and Paris, the city fell to the ruse of the Trojan Horse.

The Achaeans slaughtered the Trojans, except for some of the women and children whom they kept or sold as slaves. They desecrated the temples, thus earning the wrath of the gods. Few of the Achaeans returned safely to their homes, and many founded colonies in distant shores. The Romans later traced their origin to Aeneas, Aphrodite’s son and one of the Trojans, who was said to have led the surviving Trojans to modern day Italy.

In Greek mythology, Achilles was a hero of the Trojan War, the greatest of all the Greek warriors, and is the central character of Homer’s Illiad. He was the son of the Nereid Thetis and Peleus, king of Phthia.

Achilles’ most notable feat during the Trojan War was the slaying of the Trojan prince Hector, outside the gates of Troy.

Although the death of Achilles is not presented in the Iliad, the other sources concur that he was killed near the end of the Trojan War by Paris, who shot him in the heel with an arrow. Later legends state that Achilles was vulnerable in one heel, because when his mother Thetis dipped him in the river Styx as an infant, she held him by one of his heels.

The Homeric epic only covers a few weeks of the decade-long war, and does not narrate Achilles’ death.

It begins with Achilles’ withdrawal from the battle after being dishonoured by Agamemnon, the commander of the Achaean forces.
Angry at some dishonour, Achilles refuses to fight or lead his troops alongside the other Greek forces.

Achilles also prays to Thetis to convince Zeus to help the Trojans gain ground in the war, so that his return will regain his honour.
As the battle turns against the Greeks, thanks to the influence of Zeus, Nestor declares that the Trojans are winning because Agamemnon has angered Achilles, and urges the king to appease the warrior.

Achilles rejects all Agamemnon offers him and simply urges the Greeks to sail home.

The Trojans, led by Hector, subsequently push the Greek army back toward the beaches and assault the Greek ships. With the Greek forces on the verge of absolute destruction, Patroclus leads the Myrmidons into battle, wearing Achilles’ armour, though Achilles remains at his camp. Patroclus succeeds in pushing the Trojans back from the beaches, but is killed by Hector before he can lead a proper assault on the city of Troy.

After receiving the news of the death of Patroclus from Antilochus, the son of Nestor, Achilles grieves over his beloved companion’s death. His mother Thetis comes to comfort the distraught Achilles.
She persuades Hephaestus to make new armour for him, in place of the armour that Patroclus had been wearing, which was taken by Hector.

The new armour includes the Shield Of Achilles, which is described in detail in the poem.