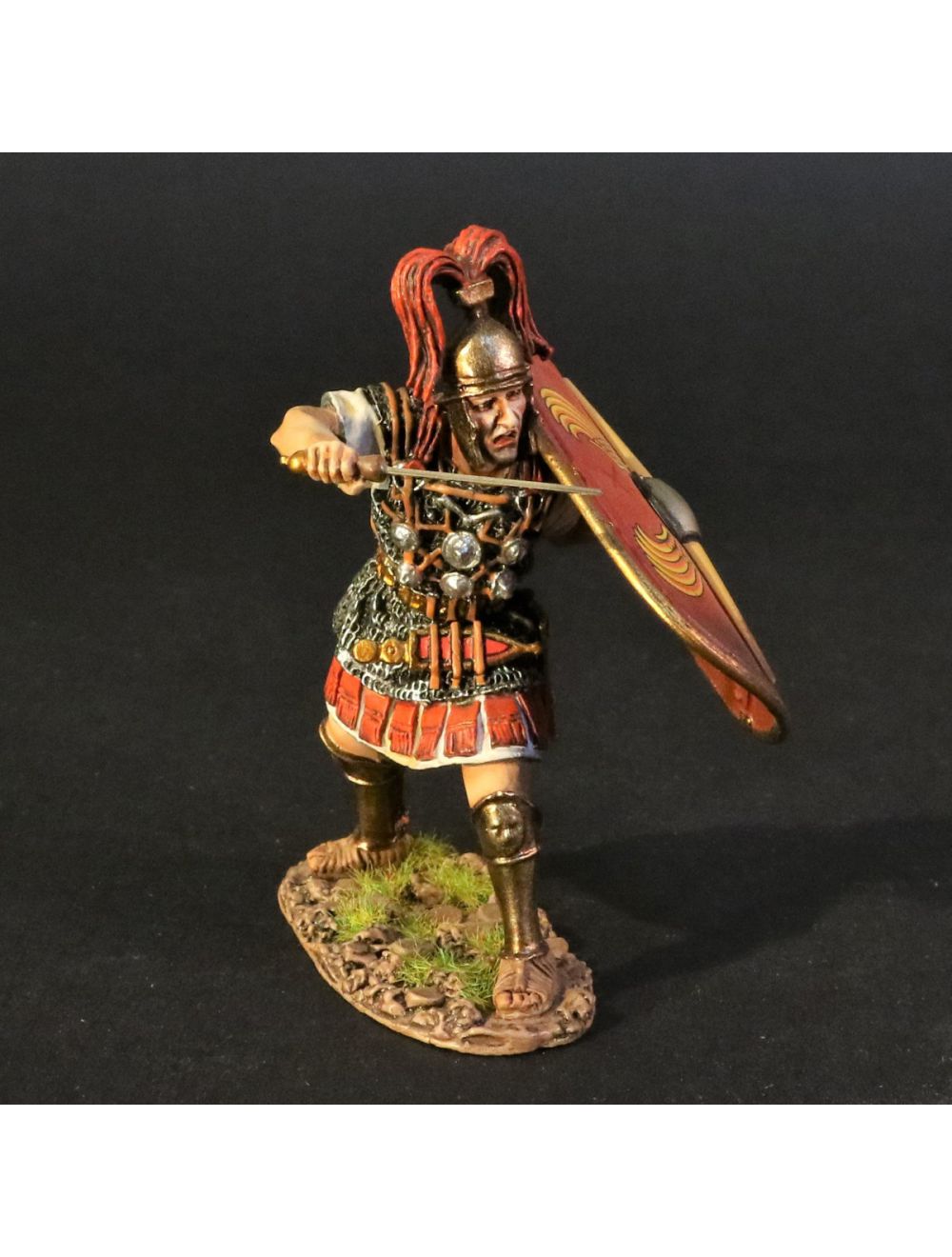 A Centurion at this time can be distinguished from other Legionaries by several methods. He usually wore greaves, and the crest of his helmet was usually turned so it ran transversely across the helmet. His sword was worn on the left and his dagger on the right which is the opposite of a Legionaire.

By the first decades of the 1st century, the COHORT had replaced the maniple as the standard tactical unit of the legions. The three lines of the manipular legion were combined to form the cohort, which generally numbered about 480 to 500 men. Maniples and centuries continued to be used as military and administrative subdivisions for the cohort. There were six centuries in a cohort, which were now all 80-men strong.

Each Centuria was commanded by a Centurion, and also included an Optio, a Signifer and a Cornicen.

The Centurions also appointed the bravest men as standard bearers, or Signifers.

A signifer was a standard bearer of the Roman legions. He carried a signum (standard) for a cohort or century. Each century had a signifer so there were 59 in a legion. Within each cohort, the first century's signifer would be the senior one. The signum that he carried was the military emblem of that unit. It had a number of phalarae (disks or medallions) along with a number of other elements mounted on a pole. The pole could be topped with a leaf-shaped spear head or later a manus (open human hand) image denoting the oath of loyalty taken by the soldiers. It sometimes included a representation of a wreath, probably denoting an honour or award.

The task of carrying the signum in battle was dangerous, as the soldier had to stand in the first rank and could carry only a small buckler. It was that banner that the men from each individual century would rally around. A soldier could also gain the position of discentes signiferorum, or standard bearer in training. If the signifer was lost in battle, the whole unit was dishonored. In addition to carrying the signum, the signifer also assumed responsibility for the financial administration of the unit and functioned as the legionaries' banker. He was paid twice the basic wage.

An Optio was an officer appointed by the centurion, and was stationed at the rear of the centuria to keep the troops in order. Their duties would include enforcing the orders of the centurion, taking over the centurion's command in battle should the need arise, supervising his subordinates, and a variety of administration duties. Optio pay was double the standard legionary pay and they were the most likely men to replace the centurion if the position became vacant.

A Centurion at this time can be distinguished from other Legionaries by several methods. He usually wore greaves, and the crest of his helmet was usually turned so it ran transversely across the helmet. His sword was worn on the left and his dagger on the right which is the opposite of a Legionaire.

Each Centuria would also contain a hornblower or Cornicines. A cornicen (plural cornicines) was a junior officer in the Roman Army. The cornicen's job was to signal salutes to officers and sound orders to the legions. The cornicines played the cornu (making him an aeneator). Cornicines always marched at the head of the centuries, with the signifer. The cornicines were also used as assistants to a centurion (like an optio). The cornicen was a duplicary or a soldier who got double the basic pay of the legionary.