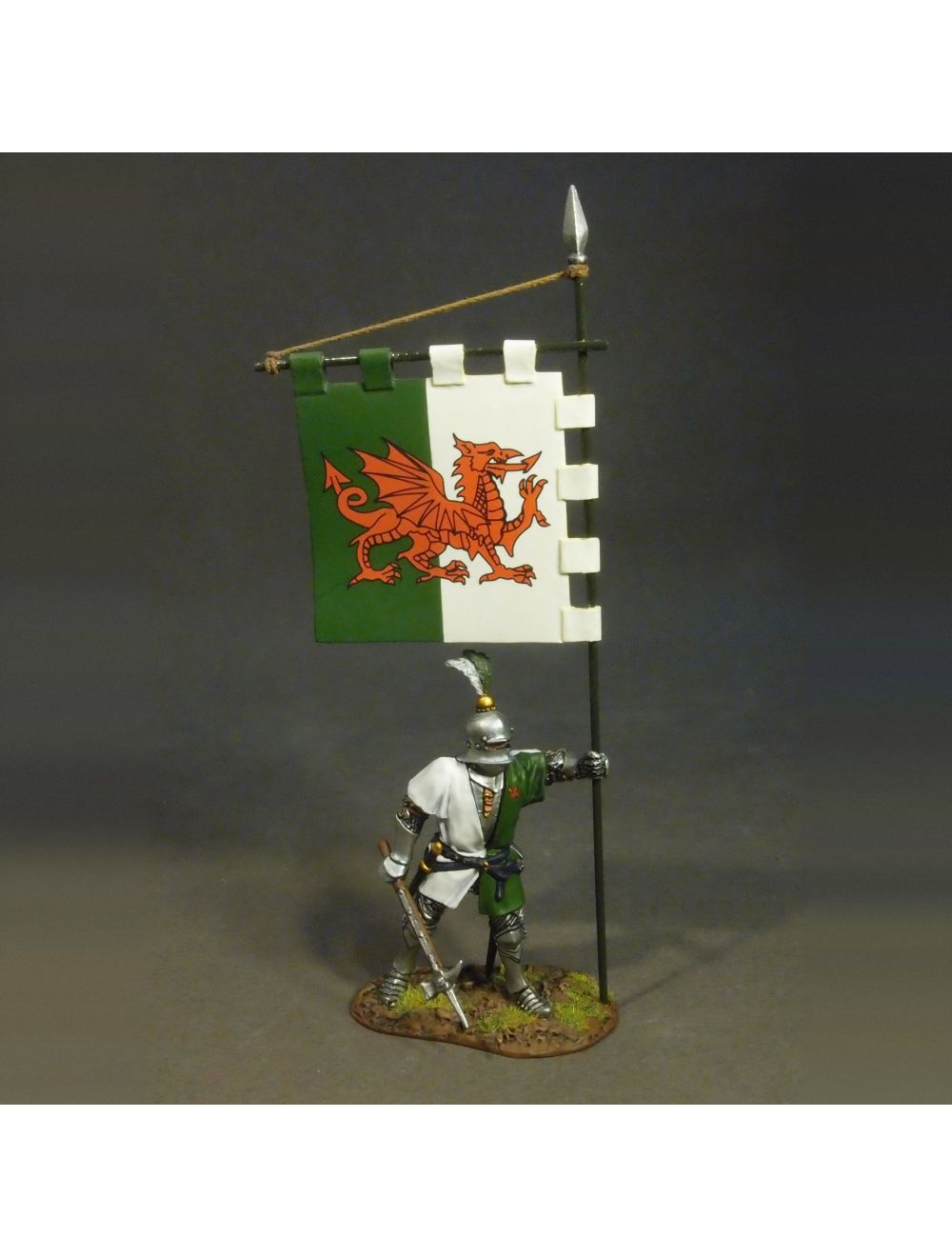 JJ-HLANC-04 - Man at Arms with Standard

Be the first to review this product
$64.00
SKU
JJ-HLANC-04
Add to Wish List Add to Compare
Details
THE WARS OF THE ROSES 1455-1487 The Wars of the Roses were a series of dynastic wars for the throne of England. They were fought between supporters of two rival branches of the royal House of Plantagenet, the houses of Lancaster and York. They were fought in several sporadic episodes between 1455 and 1487, although there was related fighting before and after this period. The conflict resulted from social and financial troubles that followed the Hundred Years' War, combined with the mental infirmity and weak rule of Henry VI, which revived interest in the alternative claim to the throne of Richard, Duke of York.

The final victory went to a claimant of the Lancastrian party, Henry Tudor, who defeated the last Yorkist king, Richard III, at the Battle of Bosworth Field. After assuming the throne as Henry VII, Henry Tudor married Elizabeth of York, the eldest daughter and heiress of Edward IV, thereby uniting the two claims. The House of Tudor ruled England and Wales until 1603.

THE BATTLE OF BOSWORTH FIELD 1485 The Battle of Bosworth (or Bosworth Field) was the last significant battle of the Wars of the Roses, the civil war between the Houses of Lancaster and York that raged across England in the latter half of the 15th century. Fought on 22 August 1485, the battle was won by the Lancastrians. Their leader Henry Tudor, Earl of Richmond, by his victory became the first English monarch of the Tudor dynasty. His opponent, Richard III, the last king of the House of York, was killed in the battle. Historians consider Bosworth Field to mark the end of the Plantagenet dynasty, making it a defining moment of English and Welsh history.

LIVERIES AND BADGES By the time of the Wars Of The Roses, badges were of considerable importance. These along with the Livery Colours were closely associated with what was then known as Livery and Retaining (Bastard Feudalism).

The badges were rarely worn by their owners, for they were marks of ownership. They were, however, worn by his servants, house-hold men, retainers, and probably temporarily by the adherents to his cause.

So great and extensive was the use of these badges, that they were far more generally employed than the coat of arms. For where a man’s badge would be common knowledge and bear some repute throughout the kingdom, few people would know what his coat of arms looked like.

There were 3 main types of flags used during the Wars of The Roses. The largest was known as the Heraldic Banner, and was used solely for displaying the coats of arms. This was normally square and made with stiffened buckram with a batton along the top. Therefore it was always on the fly, so the standard bearer did not have to wave the banner about, which gave him a spare hand in which he could brandish a weapon, so he would be able to defend himself and the banner.

The Banner was a smaller version of the Heraldic Banner, and usually only carried one large badge or device. The field was often in the colour of the livery, but this was not a rule.

The third type was known as a standard, and was a long swallow tailed style.

In an effort to destroy Henry Tudor, Richard decided to leave his position on Ambion Hill, leading his household retainers down the slope, thundering towards Henry’s men with levelled lances.

A few of the key personalities involved in King Richard’s heroic last charge will be available in the summer. King Richard III and his standard bearer, Sir Percival Thirlwall, charge towards Henry Tudor and his standard bearer William Brandon. King Richard III (2 October 1452 – 22 August 1485) was King of England from 1483 until his death in 1485, at the age of 32, in the Battle of Bosworth Field. He was the last king of the House of York and the last of the Plantagenet dynasty. His defeat at Bosworth Field, the last decisive battle of the Wars of the Roses, marked the end of the Middle Ages in England.

When his brother King Edward IV died in April 1483, Richard was named Lord Protector of the realm for Edward's son and successor, the 12-year-old Edward V. As the young king travelled to London from Ludlow, Richard met and escorted him to lodgings in the Tower of London, where Edward V's own brother Richard of Shrewsbury joined him shortly afterwards. Arrangements were made for Edward's coronation on 22 June 1483; but, before the young king could be crowned, his father's marriage to his mother Elizabeth Woodville was declared invalid, making their children illegitimate and ineligible for the throne. On 25 June, an assembly of Lords and commoners endorsed the claims. The following day, Richard III began his reign, and he was crowned on 6 July 1483. The young princes were not seen in public after August, and accusations circulated that the boys had been murdered on Richard's orders, giving rise to the legend of the Princes in the Tower.

There were two major rebellions against Richard. The first, in October 1483, was led by staunch allies of Edward IV and Richard's former ally, Henry Stafford, 2nd Duke of Buckingham; but the revolt collapsed. In August 1485, Henry Tudor and his uncle, Jasper Tudor, led a second rebellion. Henry Tudor landed in southern Wales with a small contingent of French troops and marched through his birthplace, Pembrokeshire, recruiting soldiers. Henry's force engaged Richard's army and defeated it at the Battle of Bosworth Field in Leicestershire. Richard was struck down in the conflict, making him the last English king to die in battle on home soil and the first since Harold II was killed at the Battle of Hastings in 1066. Henry then ascended to the throne as Henry VII.

After the battle Richard's corpse was taken to Leicester and buried without pomp. His original tomb monument is believed to have been removed during the Reformation, and his remains were lost for more than five centuries, believed to have been thrown into the River Soar. In 2012, an archaeological excavation was commissioned by the Richard III Society on a city council car park on the site once occupied by Greyfriars Priory Church.The University of Leicester identified the skeleton found in the excavation as that of Richard III as a result of radiocarbon dating, comparison with contemporary reports of his appearance, and comparison of his mitochondrial DNA with that of two matrilineal descendants of Richard III's eldest sister, Anne of York. Richard's remains were reburied in Leicester Cathedral on 26 March 2015.
Reviews
Write Your Own Review