The Plains of Abraham

The Plains of Abraham

September 13th 1759, French and British met in Québec City for a battle that would reshape North America. The Battle did not last long and was certainly not one of the bloodiest with only 174 dead. Nonetheless, this decisive victory by the British troops took the main French port and precipitated the downfall of the Nouvelle-France.

The Battle of the Plains of Abraham took place after a siege of the city that started on June 26th. Every farm in the area was burned and food was scarce for the French civilians and army. However, the walls around the city and cliffs were still preventing a direct assault by the British forces. Things changed when the British heard about a very steep access in a place called L'Anse-au-Foulon where apparently it was possible to climb the cliff. With the winter closing in and the menace of seeing his fleet stuck in ice, the Major General James Wolfe, who was leading the British army there, decided to try to take the city. On early September 13th, he landed his troops and climbed the dangerous cliff. They even managed to bring two artillery pieces there! 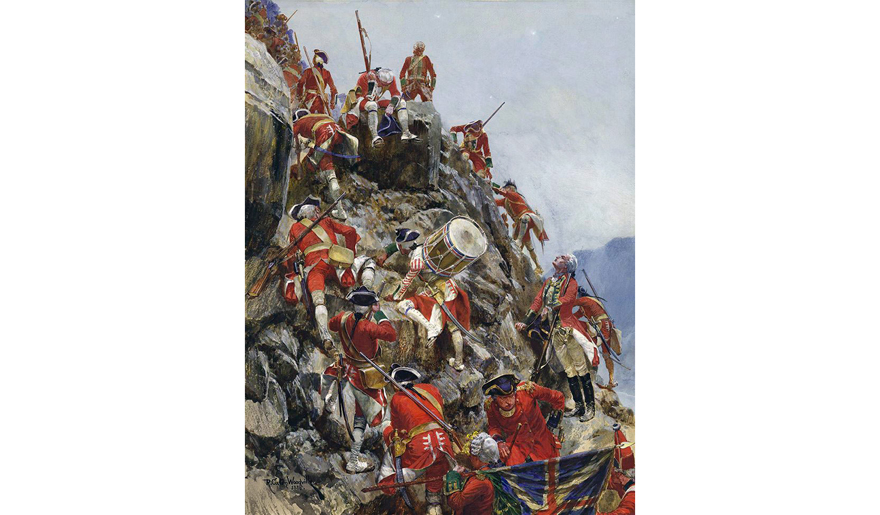 General Wolfe and his troops climbing the Heights of Abraham by Richard Caton Woodville.

When seeing the British on the Plains of Abraham, General Louis-Joseph Marquis de Montcalm went out the city walls to engage the ennemies in what many Quebecers today consider to be a very dumb move that would lose the Nouvelle-France. However, there is more to consider in this action. With the destruction of the crops before being harvested, it would have been impossible for many to survive the winter, even without the direct British menace. Some French leaders in Québec City even suggested to do suicide attacks against the British to lower the number of people to feed. Montcalm firmly stood against such practices. Montcalm, who led a decisive victory at the Battle of Fort Carillon in 1758 was quite aware of what he was doing. He knew that England was the most powerful naval force of that time and that France would never be able to send any help in time or in large enough numbers. France was not able to support war in colonies for such a long time. In his eyes (and quite rightfully), the Seven Years War in America was lost for France. Fighting on the plains of Abraham was the only way to stop the suffering of the population. Either they would win and capture ressources from the British before they would depart or they would lose and be taken in charge by the British. 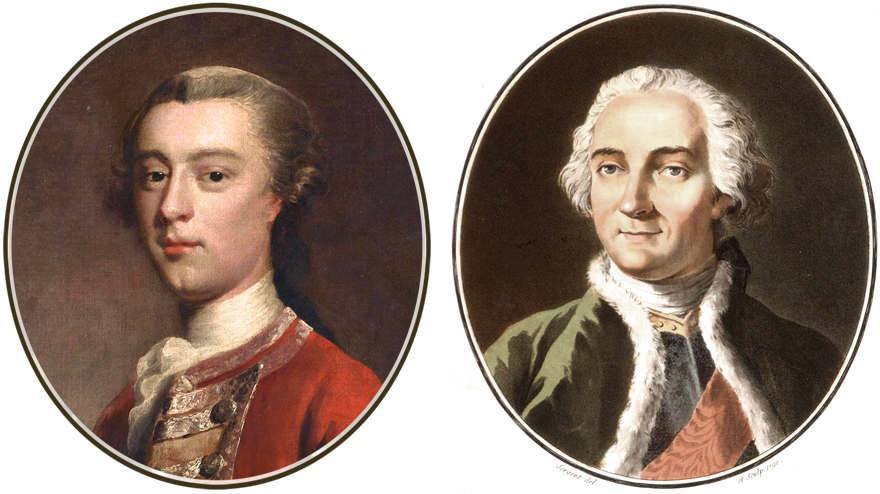 Wolfe and Montcalm, the two commanders in charge that day.

The battle itself was quite short. On the British side, 4 400 men were sent to face the opposing 3 500 already exhausted French. The lines exchanged a few artillery shots and the French went closer and fired a few volleys at the British. However, they fired too soon and no damage was done. Some reported seeing the bullets simply bouncing on the redcoats. Wolfe had a secret plan and ordered his men to load their musket with 2 bullets and waited for the French troops to be really close. When the British fired back, the effect was deadly. Not only that, but French troops were confused by themselves. When seeing that they would be shot at, many French soldiers and irregulars hit the ground to avoid being shot. When they looked around them after the volley, the number of dead was amplified by their comrade taking cover on the ground like they just did. A panic followed and the French army retreated, pursued by charging highlanders. The British, now facing disorganised French troops, won the battle with only a few fire exchanges. 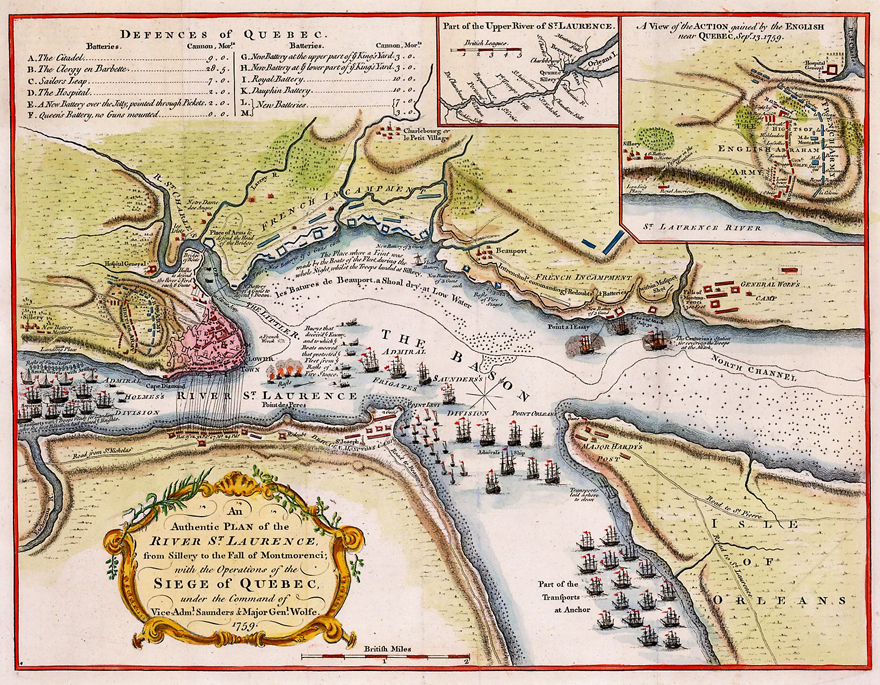 During the battle, both opposing commanders were shot. Wolfe died on the battlefield near the actual Musée national des beaux-arts du Québec. His body was brought back to England in a rum barrel and is now resting in St Alfege Church in Greenwich.

The Wolfe Monument marks the place where he died.

Montcalm, mortally wounded, was brought back inside the city and died the next day. For a while, his skull was mounted in a reliquary and held at the Ursulines in Québec City. His remains were never brought to France. They were instead moved in 2001 in a mausoleum at the Monastère des Augustines of Québec. 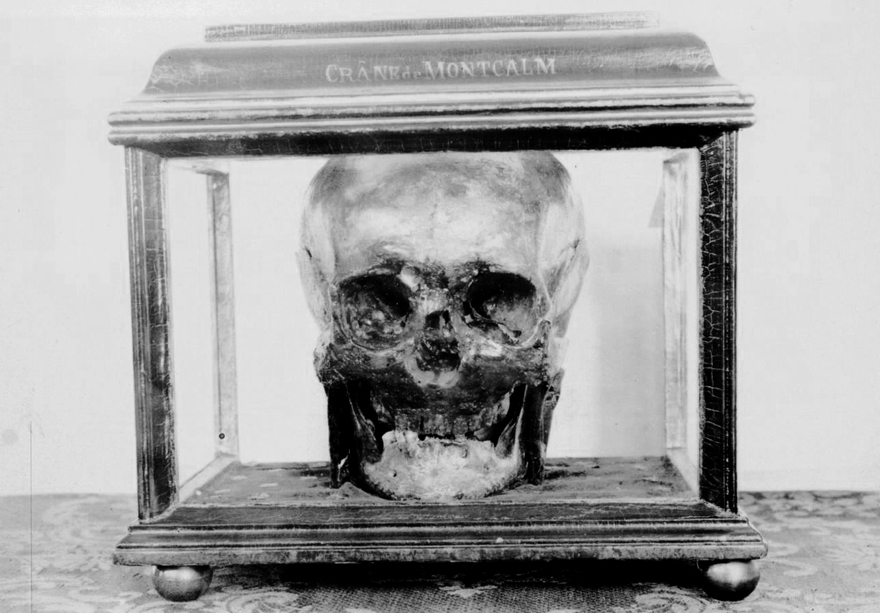 The skull of Montcalm when it was held by the Ursulines.

This battle is now considered as the most important turning point of the Seven Years War in North America. With such an importance, it’s no surprise to see toy soldiers manufacturers work on that. John Jenkins Designs has plenty of pieces related to this battle within his various collections. Some pieces are obviously located inside the Plains of Abraham collection, but compatible troops are also located inside the Raid on St.Francis, Clubsets and Ticonderoga collections. So talking with your toy soldier dealer might be a wise idea if you have an interest in this battle. 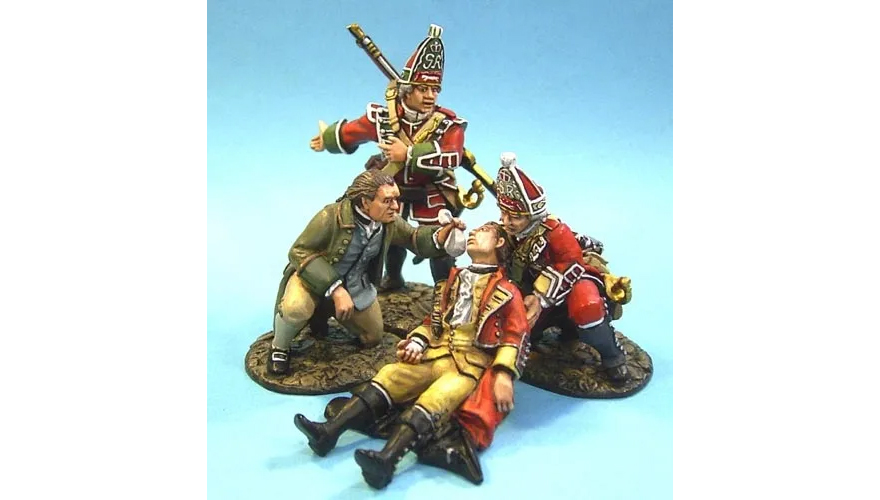 The death of Wolfe by John Jenkins (retired item).

Today, the Plains of Abraham are quite different. It is now a big national park where people are going to have fun, enjoy shows, jog or just relax. Many parts have not changed since and explanative panels are everywhere to tell about the battle. So it’s a place worth seeing for any fan of history. Plus, this is only a few minutes away from the Toy Soldier Club store!