A Second Plane for Pips

A Second Plane for Pips 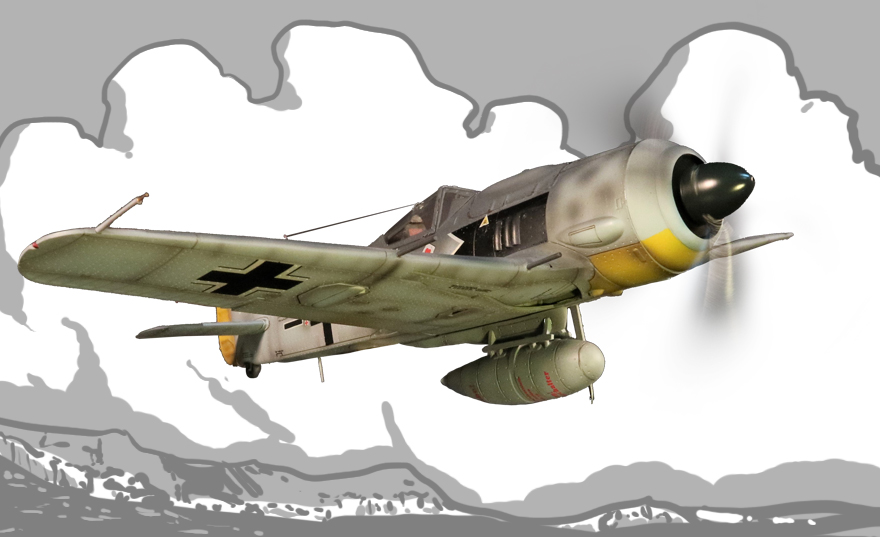 As many of you might already know, this is not the first time that John Jenkins covers this ace. A while ago, a set of two figures (JJ-ACE-201P) was produced depicting Priller and his wingman. This set was designed to go with the JJ-ACE-201, a model version of the Bf-109 E Priller piloted when he was serving in the JG-51 during Autumn 1940.

This first plane was magnificent, but only representative of Priller’s early years in the war. Eventually, “Pips” was assigned to the JG-26 where he and Adolf Galland became friends and where he flew the new FW-190 fighter. The FW190 was seen by many pilots as one of the best planes of the Second World War. Compared to the Bf-109, its firepower and maneuverability at low and medium altitude were superior. Its radial engine was also able to take more punishment while its landing gear was more stable than the one of the Bf-109, leading to far less ground accidents. The new plane by Jenkins represents the Black 13-+- FW190 A-8 numbered 170346 that Priller piloted in 1944 while being posted in France.

Look at the weathering job on this! You might think this model smells like sun heated paint,
burnt oil, gun grease and fuel… but it is surprisingly odorless.

It would be an understatement to say that planes produced by Jenkins are the best. The weathering job on those is incredibly realistic and this new FW-190 makes no exception. This model is equipped with a standard 300 liter capacity drop tank under the fuselage and can be displayed with landing gear in or out by using magnetized alternative pieces. The way they stick in place makes this feature oddly satisfying to play with. What appears to be a bearing system of the propeller is also to be mentioned as it allows it to spin smoothly for ages when blowing on it. The canopy can also be opened to see the details inside the cockpit. As it is the case for every modern plane by John Jekins, a hole under the fuselage allows the use of a stand that is sold separately. On the side of the plane, we can see his iconic nose art depicting an ace of hearts with “Jutta” written on it. Jutta was the nickname of Josef Priller’s longtime girlfriend, Johanna Riegele, with whom he got married after the war. 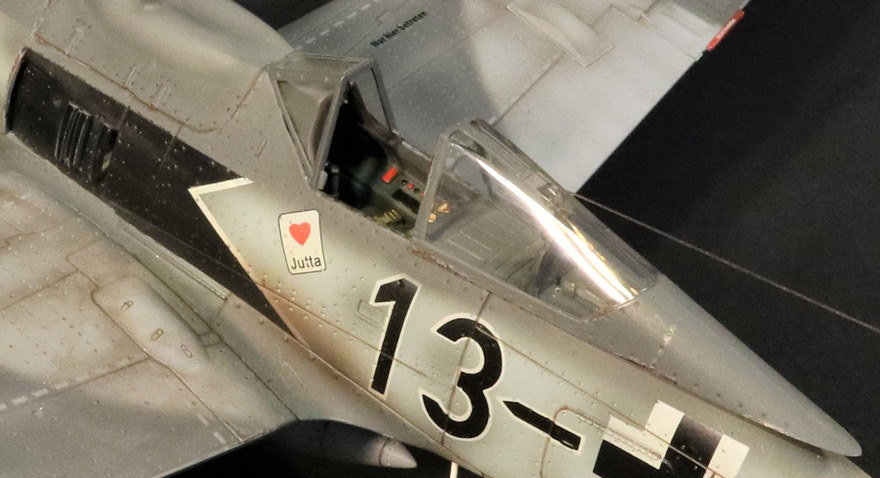 The inside of the cockpit and a sweet display of love for Jutta on the external side.

This plane is the model that Josef Priller most likely flew during the D-Day landing. Priller and Heinz Wodarczyk, who were posted at Bondues airfield, were the only two German pilots to fly on June 6th 1944. For those two men, the idea of strafing the beaches all alone was pretty grim. As the only target in the sky, both pilots were expecting to die on that day. But against all odds, they came back without a scratch.

If you ever watched the 1962 movie, The Longest Day, you might recall this scene where Josef Priller’s (portrayed by Heinz Reincke) hot temper is shown. In the background, the expected FW-190s are missing. Instead, they were replaced by a repainted Nord 1002 Pingouin II, the French version of the Bf-108. This makes the thing a bit odd, but it is still a good movie for which Priller worked as an advisor during the production, shortly before his fatal heart attack. During that time, he was also manager for the Riegele brewery.

To conclude, this model is a sweet second plane to cover the two main phases of the “Priller Collection”. It’s also a beautiful model of one of the best planes of World War Two. Details are incredible and really fun to play with. This is not often that we consider actions features on a collectible toy soldier, but in this case, the magnetized pieces and the spinning propeller must be mentioned! I now leave you with somes scenes from The Longest Day where we can see Priller just being himself…