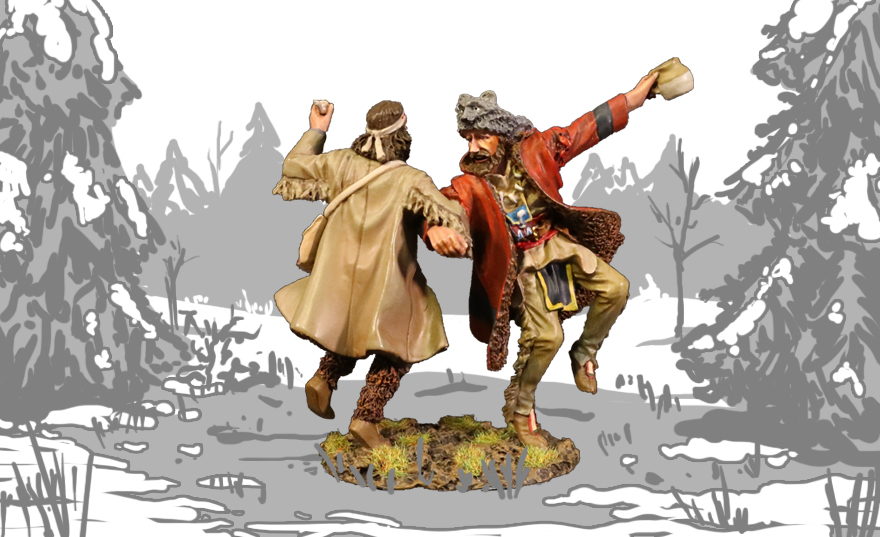 In the world of toy soldiers, most of the pieces are related to more or less violent themes. However, there are some toy soldiers that are not following this trend. Such is the case with the new group of voyageurs by John Jenkins Designs. Of course the voyageur had their share of conflicts with other voyageurs, first nations and wilderness, but this new collection is all about partying. So let’s look at the first piece of this new series: JJ-WSP-50 - Jean-Claude Clymer And Didier Dupont.

This vignette is showing two voyageurs dancing together. One of them is drinking while the other is holding a tobacco pipe. The body pose is excellent as it makes no doubt that they are dancing. Their highly detailed outfits are made of an interesting mix of European and first nations fashion clothings. This fashion cocktail is what makes them look like genuine voyageurs. The sculpting job is quite well done with nice texturing for the fur parts such as the inside of the coats.

The red coat is actually a Hudson Bay Capote.
Those were crafted using a specific red blacket that is still available via the Hudson Bay Company.
The version on the figure was doubled with fur.

Last August, the JJ-WSP-50 became the first of this voyageur partying series to be released. Another 2 figure set was also released in September showing two figures sitting and few more are expected to arrive soon. 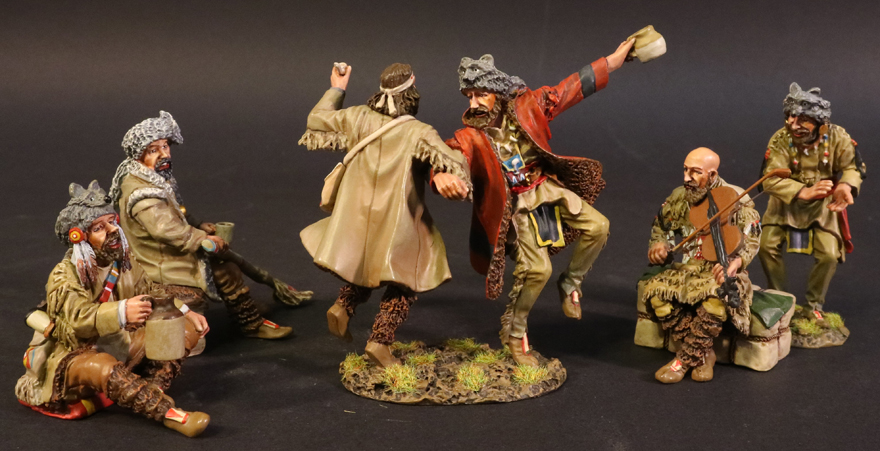 The JJ-WSP-50 with the other figures from this collection.

This group of figures was actually greatly inspired by the 1974 painting “Alouette” by John Clymer, thus explaining the reference to “Clymer” in the title of the JJ-WSP-50. This painting represents a “rendez-vous” which was a gathering held at a specific place and date by the voyageurs. They would meet there, trade a bit, take news from each other and, of course, celebrate! The produced figures are not exact copies of the painting, but adapted works. One major difference between the painting and the produced figure is the ground. The action on the painting takes place during winter while the figures are over a grass covered surface. This makes those figures compatible with the rest of the Whiskey, Scalps And Beaver Pelts collection.

The title “Alouette” is a reference to the French Canadian song of the same name. The song is about a lark that will soon be plucked thoroughly on every part of its body. Such simplistic songs were used by voyageurs to keep a rhythm while paddling with their canoes. Some suggest there might be a hidden message; The lark, being an early bird, would wake up people who partied and would prefer to sleep, thus explaining the abusive will to thoroughly pluck the poor bird. This speculative meaning to the song makes it somehow even more fitting with the subject of the painting.

To conclude, the JJ-WSP-50 and the whole groups of figures partying will surely be an interesting set for fans of the voyageurs and John Clymer. It’s also so refreshing to see figures who seem to enjoy life instead of fighting. Now, if you want to party with them, here is the song on which they are probably dancing right now.