May Napoléon Be With You

May Napoléon Be With You 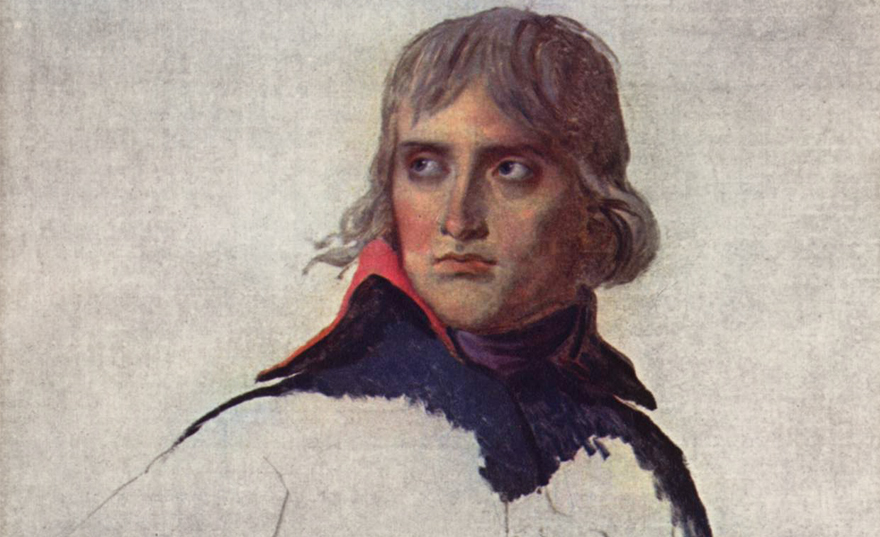 May is an important month when it comes to Napoléon. Not only did he die on May 5th 1821, but he was also officially declared Emperor of the French on May 18th 1804. In addition, he also won the Battle of Lodi in 1796, he started his Egyptian campaign in 1798, he established the Legion of Honor in 1802, he was declared war by Britain in 1803, he dealt with a rebellion in Spain in 1808, he was defeated for the first time in 10 years at the Battle of Aspern-Essling in 1809, he won the Battle of Lützen and Bautzen in 1813… all those during months of May! Today, 200 years after his death, his legend still lives through the toy soldiers. Pieces related to this character’s life are so numerous that it can be almost overwhelming! So it would be only fitting to have a look at Napoléon Bonaparte this month and how our manufacturers are covering this topic.

But first, let’s go back in time when toy soldiers about Napoléon were ordered by Napoléon himself! One memorable set was the 240 piece army he gave to his son Napoléon François Joseph Charles Bonaparte in 1812. The pieces were depicting soldiers of the 21st and 22nd light infantry that were attached to Napoléon and Marie Louise, symbolising his two parents. The second goal of that gift was to eventually show regimental structure and ranks to their young kid. Since those days, it’s a must for every toy soldier maker to cover this time period. It’s not surprising that all the manufacturers that we have at Toy Soldiers Club are following that rule. Some collections are quite exhaustive, others are more frugal, but they all have their interesting approaches and inspirations. 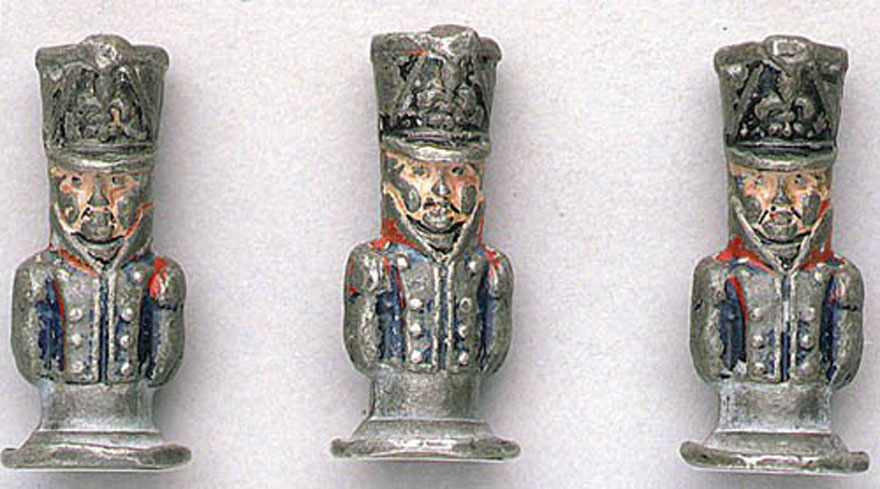 Above, those are the toy soldiers ordered by Napoléon.
The colors are not the original ones as they were repainted when l'Aiglon went to Austria. © Fondation Napoléon

In the last years, King and Country mostly focused his production on two nationalities: The British and the French. They are covering those two countries in the European theater as in the Egypt Campaign, making the collection actually quite vaste. When it comes to inspiration, many collectors will see references to movies such as The Duellists or TV series such as Sharpe. Those are not accidental as Andy Neilson, creative director at King and Country, is a big fan of cinema. They also dig a lot in old drawings from Job (Jacques Onfroy de Bréville) who illustrated Napoleon’s life. Many of his works were regrouped in the book “Napoléon: Le Grand Album de notre enfance”. The book that might lack objectivity, idealizing every action of the Emperor, but is still a worthy piece to own for the illustrations. 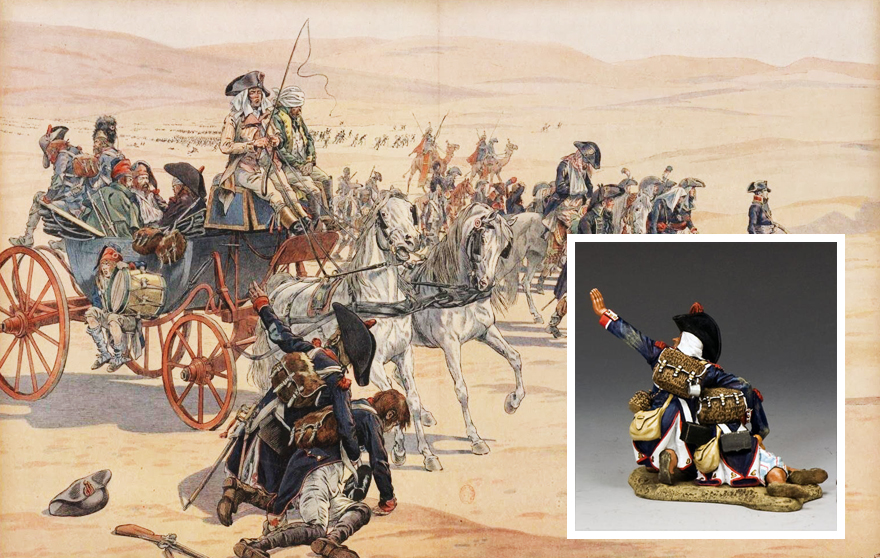 NE023 - Victim of the Sun and his inspiration.

At the opposite of King and Country who limits itself to 2 nations, we have First Legion who covers as many countries and duchies as possible. They have a collection of several hundreds of pieces from Russia,  Brunswick, Nassau, Great Britain, France, Saxony, Warsaw and more! They also like to produce personalities. Collectors who enjoy depiction of historical figures are usually big fans of First Legion. They have Murat, Lasalle, Bessière, Lannes, Marbot, Kutuzov, Kaisarov, Raevsky, Kutaisov, Yermolov, Bennigsen, Blucher, Dorsenne, Poniatowsk to name a few of them. Of all of those pieces, one of the best sub-collections is probably the one covering the Retreat of Russia. This is an exceptionally well made collection, with very touching pieces, rarely in fighting poses. With all their clothes in rags and covered with snow, those toy soldiers are always giving me a chill. Winter was the real enemy. 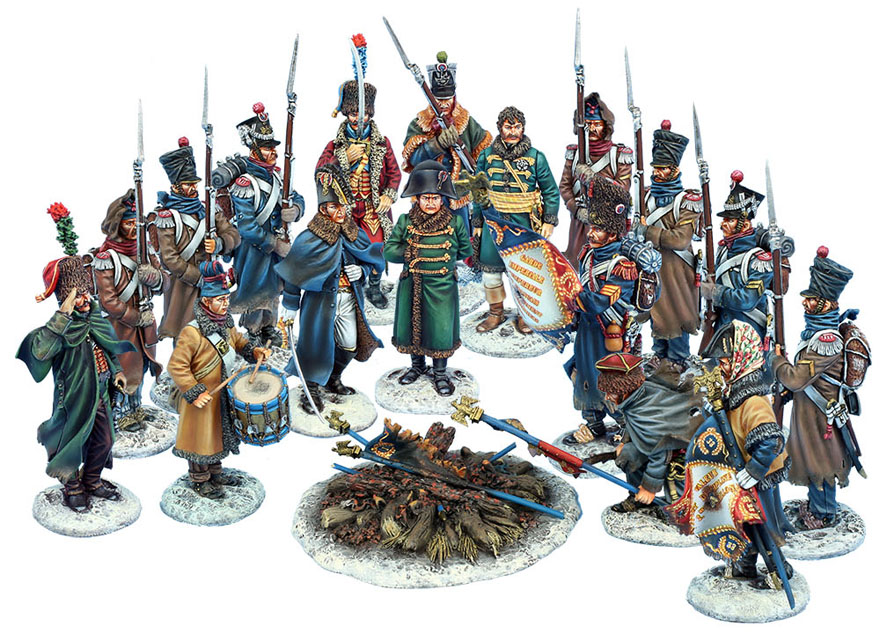 Burning their own flags... How can we not be moved by such a dramatic moment?

When it comes to John Jenkins Designs, his approach is very unique. He often targets theaters that are less covered, but that are including pieces compatible with more mainstream collections. A good example is his collection about the Peninsular War. Those are typical of that theater of operation, but can be used in other battles too! Same thing goes for the 1812 War where the British uniforms were the same there as in the Napoleonic wars. That’s why many collectors will often mix his pieces with those from King and Country and vice versa as they have close enough scale and style. Jenkins' approach is also unique as he is creating what he calls “anti-war” pieces, depicting the gruesome reality of the wounded and dead. The goal is not to idealize war, but to remember the sacrifices and avoid reproducing them. 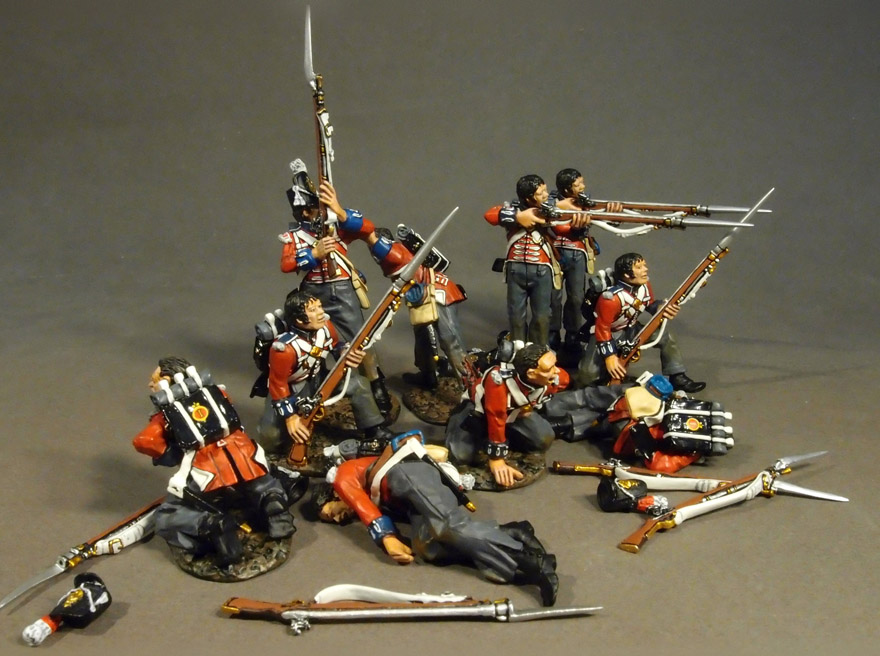 Those rifles and hats are actually very useful in plenty of context.

Now that we have taken a look at the manufacturers, it would be nice to get back to Napoléon’s son and conclude. As you might know, our shop is located in Québec City. If you exclude toy soldiers, this is not where we usually find things related to Napoléon’s history. But if you go to Cimetière St-Charles, you will notice one very particular monument with an out of place empire/corinthian look. This is because this monument was commissioned for Napoléon’s son, the Aiglon. However, things didn't turn out as expected for his son when he suddenly died in Austria. Therefore his monument was never used and his ashes were transferred directly from Vienna to the Invalides in 1840. Learning that the monument was empty, William Venner, a Banker from Québec City, purchased the construction and moved it to Canada to serve as his own family monument. So if you ever visit our store, I suggest you also take a look at this lost part of Napoléon’s heritage. 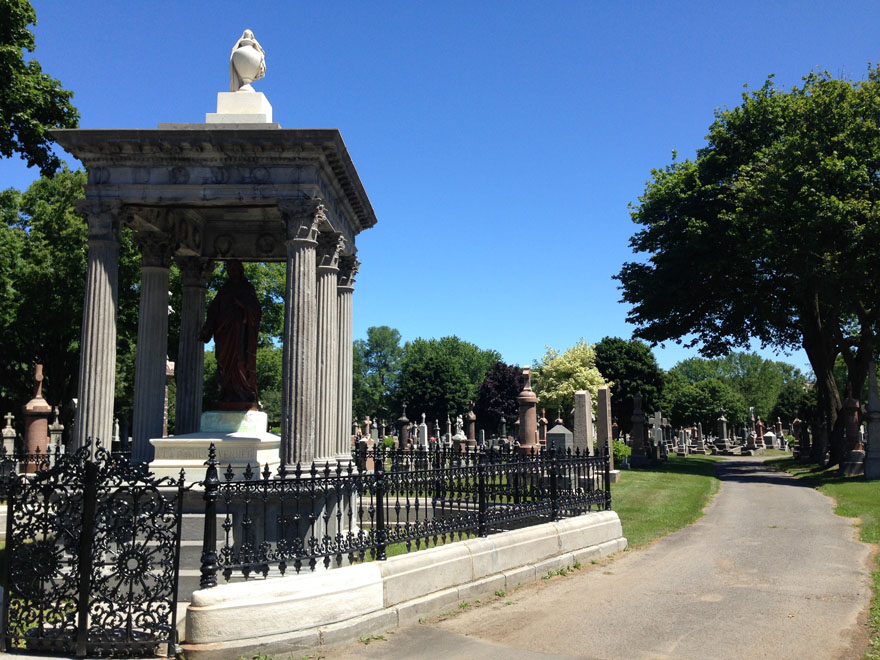