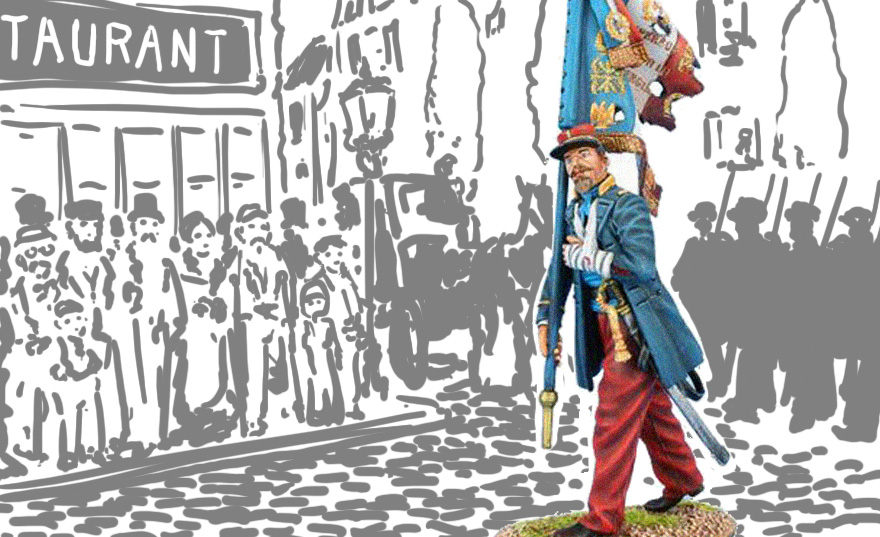 In 2019, First Legion released a new collection about the Franco-Prussian War. Sadly, this series of figures went mostly unnoticed and only has the French side so far. But today it’s time to bring back light as this collection has one magnificent flag bearer. So let’s have a look at the FPW04 - French Line Infantry Wounded Standard With Tattered Flag; a toy soldier who manages to summarize a whole conflict as seen by the French side.

On July 19th 1870, France declared war to the Kingdom of Prussia. This conflict was basically one of the side effects of the Napoleonic wars and the long and complicated reconfiguration of Europe. As Otto von Bismarck rightfully once said: “Without Jena, there would be no Sedan”. For Napoleon III, Emperor of the French, this war was an opportunity to extend the French territory and get rid of a powerful rival who was recently claiming the Kingdom of Spain. However things went poorly as France was unprepared for such a war. Six months and ten days later, the war was over. The North German Confederation led by Prussia obtained a crushing victory. In total France lost 139 000 men while 4 474 414 other men were taken prisoner. In comparison, the North German Confederation lost “only” 51 000 men.

Now that the historical overview is over, let’s see this FPW04. The first noticeable detail is the tattered flag. This regimental flag is covered with holes and burn marks, as the French army ended up during this war. In addition to the thorn flag, this infantry man is wounded. Once again, this artistic choice is an echo of all the wounded soldiers. One interesting feature is the mustache on this figure. Not only was it a very fashionable facial hairstyle to have in that time, but it was also the style that the French Emperor Napoleon III had! So it’s a nice touch that makes a facial connection to the main French actors who led to this conflict. Despite all those wounds and holes in the flag, this figure looks proud and marches with confidence. This attitude is also representative of the mind set French people had during that time. It is true that many of the politics brought by Napoleon III isolated France, but France was still France and proud of it. 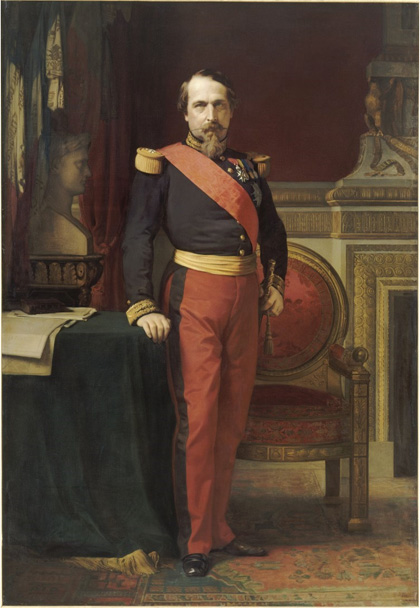 Napoleon III by Hippolyte Flandrin (1861)
He is obviously very concerned that someone has stolen his facial hair style.

Music lovers might know Aristide Bruant, the famous French singer from the “Belle Époque”. Before having a career in music, Bruant served in the French Army and fought during the Franco-Prussian War. It’s during that time that he wrote the 113e regimental song called “V'la l'cent-treizième qui passe”. Oddly enough, some lyrics seem to be written to fit with that figure… or maybe it’s once again that figure who managed to capture that time period so well?

In short, the design of the FPW04 really managed to capture the spirit of the Franco-Prussian War as seen by the French side. It’s a wonderful piece to have, even without the rest of the collection. For timeline collectors, it also makes a good link between the Napoleonic War pieces and the First World War collections as it is the nationalism and bitterness born from this conflict which became the seeds of 1914-1918.