In December 2021, King and Country released two Saracen archers. At first, they were planning to do only two different models. But those were looking so good that King and Country decided to add five other archers to the pack. This month, those five extra archers finally arrived. It’s time to look at the MK224 - Advancing Saracen Archer.

In traditional Arab archery, the bow was a gift of God to the men. It was given to Adam by the archangel Gabriel after being cast away from Eden. With that weapon, Adam could now hunt the birds who were eating the seeds from his crops. It is also said that Muhammad was an skilled archer and owned several bows. In addition to warfare uses, the Prophet also enjoyed archery contests with his friends. With such a divine connection, it makes no surprise to have this praised discipline so much integrated in their middle age warfare.

On the other hand, their crusader enemies were considering archery as a contextual necessity while real glory was only achievable by the use of close combat and charging cavalry. Despite this different vision, they quickly understood that Saracen archers were a formidable foe. Those elite bowmen cost them many battles, especially when mounted on a horse. Such was the case at the Battle of Hattin where heavily armored and exhausted crusader knights were not able to pursue the harassing hordes of Saladin’s light mounted archers.

Saladin taking the True Cross relic from Guy de Lusignan at the Battle of Hattin.

Today, a lot is known about the Saracen archers. Many details are known from texts such as “Saracen Archery” that was written by Taybugha Al-Ashrafi Al-Baklamishi Al-Yunani, a Mamluk soldier from the 14th-15th century. In those texts, incredible feats are reported. One of them is their quick fire rate. An average archer was expected to shoot 3 arrows in 1,5 second. The key was to have the arrows in hand and not in the quiver and to place the arrows on the thumb side. Those techniques were thought to be fantasies for a long time as they were impossible to achieve with the modern archery techniques. However, they are now believed to be true as some contemporary archers are able to replicate them by following the described techniques in those books.

This figure that we have today holds a composite bow that was a direct descendant of the Scythian and Persian bows of antiquity. A tiny dagger is attached to his belt with a gourd and, of course, a quiver filled with arrows. He is lightly protected by a hauberk, a round breastplate, a metal helmet with turban and a minimalist round shield. The goal was to be as mobile as possible. On that point, the body pose suggesting a fast walk while taking cover is working perfectly.

The mostly green and metallic color scheme is also coherent with the rest of the bowmen series and the rest of this collection. One good detail on this series is the use of different facial hairs. By doing so, each piece seems to have a more unique individual personality.

The only detail that is a bit off is the side of the arrow on the bow. However, this can be explained by the fact that he tries to keep his bow as low as possible for cover and maybe the next arrow will be on the other side. This detail for the shooting position was accurately done on the first two figures of this series: The MK220 - Kneeling Saracen Archer and the MK221 - About-To-Fire Saracen Archer. 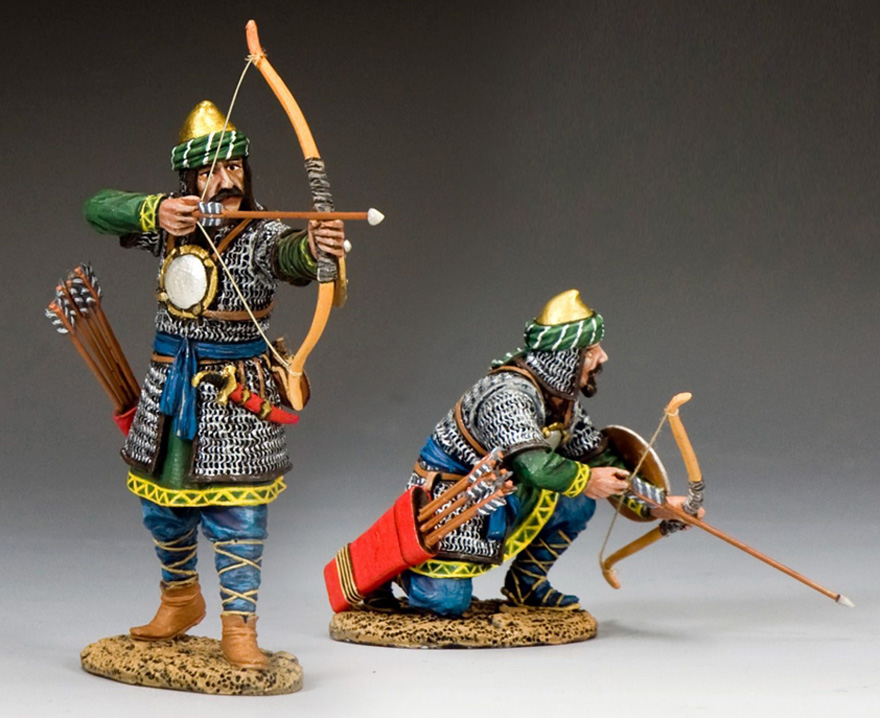 So this new MK224 - Advancing Saracen Archer is a beautiful and useful addition to the Crusaders and Saracens collection. It’s also a good thing that King and Country produced more than only two new recruits for such an important branch of Saracen warfare. It would have been nice to see some figures also carrying extra arrows in their hands and ready to fire. But maybe this will be for the next release! Until then, I leave you with this interesting video about experimental archeology from the archer Lars Andersen.